Take a walk around the Inner Harbor. We will start in the hotel lobby and finish the walk across the bay at Federal Hill Park. A fun water taxi ride will bring walkers back to Pier 5 next to the hotel. This 1.5 mile walk and water taxi ride will pass a number of beautiful sites and landmarks such as the Seven Foot Knoll Lighthouse, Historic Ships, the Baltimore National Aquarium and Science Museum, and more. NEEP’s founder, Sue Coakley, will keep things interesting with conversation and fun facts.

Have fun and get a good workout by paddling around the Baltimore Harbor in a “Chessie” paddle boat or coast and steer in the “Pirate Ships of Baltimore!” The original Chessie Dragons have become an iconic fixture of Baltimore’s waterfront landscape and have served hundreds of thousands of visitors since opening in 1975. A clean energy alternative, the Electric Pirate Ships operate on lithium ion battery power, are fueled by solar energy, and provide fun for children and adults of all ages who want to storm the harbor.

Where Baltimore’s shipbuilding and steel mills once stood, you’ll now find a busy destination for fun. One of America's oldest seaports dating back to the 1600s, the Inner Harbor is an important landmark and popular tourist destination today. It has everything, from scenic waterfront views to fresh seafood restaurants to spectacular museums. The architects of Baltimore’s Harborplace, Benjamin Thompson and Associates, also played a role in the development of Faneuil Hall and Quincy Market in Boston.

* Language describing the Inner Harbor and landmarks has been compiled from various sites dedicated to Baltimore tourism.

Located just a few blocks from Baltimore’s picturesque Inner Harbor, Little Italy holds its own as a cozy haven of Italian culture and delicacies. This cozy and colorful neighborhood just east of the Inner Harbor may be small, but you’ll find at least 20 authentic Italian cafes and eateries in Little Italy. As you stroll through the charming narrow streets, you may happen upon outdoor movies, evening bocce matches on the courts at D’Alesandro Park, or one of many Italian festivals throughout the year. Jonestown in Downtown Baltimore offers centrally-located rowhomes at affordable prices convenient to both Downtown and the Johns Hopkins Hospital East Baltimore campus. Large, three-story rowhouses are the norm here as the area was once home to some of the wealthiest families in Baltimore. Jonestown contains numerous landmarks, including the 1828 brick Phoenix Shot Tower, once used to manufacture shotgun pellets, and the 1793 Star Spangled Banner Flag House museum.

* Language describing the neighborhoods and landmarks has been compiled from various sites dedicated to Baltimore tourism.

We will walk from the hotel and across the harbor ways to the Seven Foot Knoll Lighthouse and Pier 5 Waterfront Garden.

An optional opportunity to dine at local restaurants with NEEP staff and small groups of conference attendees. NEEP will handle reservations, and we will all cover our own tabs. Sign-up at the Summit.

Begin the day outside with yoga as you overlook the Inner Harbor. NEEP Founder, Sue Coakley, will present and join our yoga instructor, Milan Sandhu. 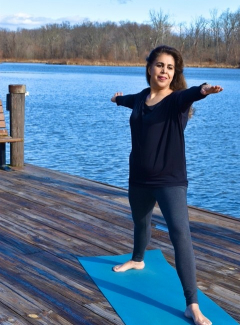 Milan has taught yoga for over 20 years, having started simply as a means to deepen her own journey into a more meaningful and grounded existence. As she learned and grew in this space, both physical and mental pain were diminished, moments of joy expanded into days and weeks, and it occurred to her that this was a lifestyle. Her lifestyle. This was something that needed to be shared so that others who were ready could discover their own path to finding a deeper connection to the people and life that surrounds us. We are all somewhere on that path, and she looks forward to discovering others along the way. Will move indoors in needed.

Established in 1763, Fell’s Point is a city, state and National Historic District and boasts more than 300 buildings on the National Register, including the oldest standing residence in Baltimore City, the Robert Long House. One of the oldest neighborhoods in Baltimore, Fell’s Point was once a bustling shipbuilding port. Its visage has remained largely unchanged since its founding—picture Belgian block streets, waterfront restaurants and cozy boutiques just a few blocks east of the Inner Harbor.

Back to Summit Page