Updates from the 2015 Better Buildings Summit: Big Progress Towards an Ambitious Presidential Goal

Over 900 stakeholders from around the country gathered last week in Washington D.C. to showcase the accomplishments made thus far in the U.S. Department of Energy’s Better Buildings Initiative. The initiative was launched by President Obama in 2011 with the goal of reducing national building energy usage by 20% over ten years. A key strategy in this program is the Better Buildings Challenge, a leadership initiative that calls on CEOs, housing developers, university leaders, and state and local governments to reduce the energy usage of their entire building portfolios. Representatives from participating organizations gathered to exchange best practices and to discuss future opportunities for energy savings in the nation’s building stock.

Four years into the challenge, more than 250 leaders across the country have stepped up, representing over 3.5 billion square feet of building space, 650 manufacturing facilities, and $5.5 billion in financing investments. Since 2011, partners have saved 94 trillion BTUs and $840 million. This translates to 5.8 million metric tons of avoided carbon emissions and is the equivalent of taking over 1.2 million cars off the road for a year. Among the NEEP member states, Maryland was recognized as a leader for reducing the energy usage of state buildings by 21%. The chart below shows the rapid growth in energy and cost savings that have been realized by partners since the initiative’s inception. 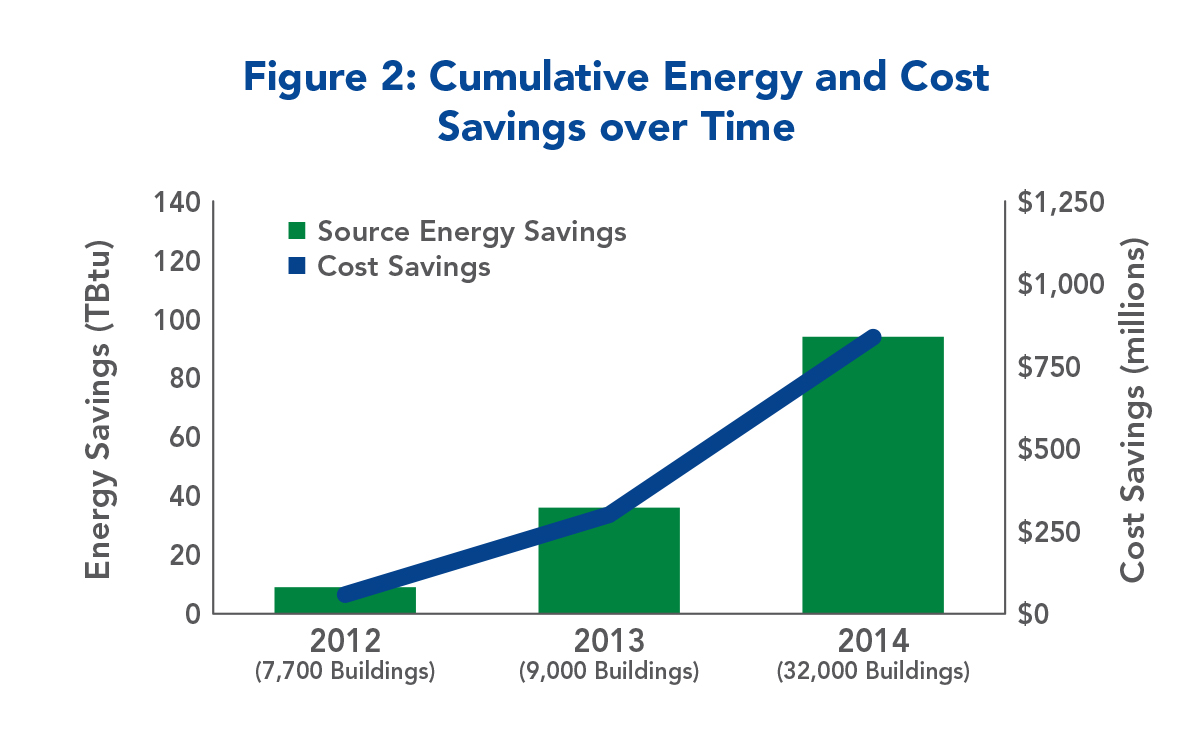 Members of NEEP’s High Performance Buildings team were in attendance to connect with stakeholders from the region and to announce a partnership in the Better Buildings Home Energy Information Accelerator. This accelerator builds on NEEP’s work to provide more reliable home energy information to buyers during the home sale transaction. The partnership with federal agencies, along with regional, state, and local leaders in real estate and energy efficiency aims to ensure proper valuation of energy efficiency in home prices to increase the incentive to invest in cost-effective energy saving retrofits. In the same way that people have gotten used to expecting a “miles per gallon” rating when they shop for a new car, potential home buyers need to have some insight into the amount of energy their new home will use before they buy it.

Complete with a Twitter Town Hall, the conference included dozens of presentations on specific topics that provided stakeholders with a forum for information exchange through case studies and facilitated discussions. The most effective presentations provided ample opportunity for engagement and networking among attendees. This was where attendees were able to get down in the weeds and sort through the barriers and challenges they face in their respective areas. The name of the game for this conference was to get the right people together in a room and encourage a free flow of ideas and information.

The eagerness among stakeholders to share their experiences and learn from one another highlights the importance of information and best practice sharing in the implementation of comprehensive energy reduction strategies. To address this important need, the Department of Energy highlighted their Better Buildings Solutions Center which acts as a “one-stop shop” for partners and includes a searchable energy savings solutions database along with successful implementation models.

The success of this year’s summit shows the crucial role that efficiency and other demand-side resources are going to play moving forward in the evolving national energy landscape. As partner organizations shared their success stories (some have already reached and surpassed their energy goals), the focus remained on the future and partners were encouraged to continue developing their energy reduction strategies and to recruit one organization per year to commit to the challenge. It was inspiring to see the passion and dedication of the stakeholders at this event in their efforts to rise to this presidential challenge and we look forward to continued successes at next year’s summit.

The Twitter Town Hall had the energy efficiency Twittersphere buzzing, here's a look at the action: