What a cliff hanger! In the fight to expand energy efficiency in Delaware, we had an uphill battle, a gritty gang of advocates, steadfast civil servants, a reluctant lawmaker. And somewhere in there, some extraordinary legislative maneuvering. Maybe not ready for Hollywood, but for those of us who have been toiling away to bring ratepayer-funded efficiency programs to Delaware, this victory is sweet.

In the wee hours of the morning of July 1 as the 2014 session drew to a close, Delaware’s General Assembly surprised and delighted efficiency supporters, passing a bill to enable ratepayer-funded programs and allow utilities to deliver those programs to their customers.

Even though it had passed the House last year 38-0 and had strong bi-partisan support, it looked as though for the third year in a row House Bill 179 would die another death, and with it, the hopes of moving  “The First State” up from #22 in the ACEEE Scorecard.

The bill seemed stuck in the desk drawer of one a powerful Senator who, though an avowed supporter of efficiency, favored a status quo which limited efficiency programs to the state’s non-profit Sustainable Energy Utility (SEU) — delivering only a tiny fraction of what neighboring states do in terms of investments and energy savings.

In 2014, Delaware’s per capita efficiency investments are about $5.65, compared to a 12 state regional average of $50.36, with leading states budgeting more than twice that amount. The SEU was created with much fanfare in 2007, but with its only sources of funding coming from ARRA funds and RGGI proceeds, it has hardly been sustainable.

Without adequate funding, the SEU is falling far short of its goals, has had to suspend some programs and offers only financing for business customers. Work to date made it clear it would be nearly impossible to meet goals set for a state Energy Efficiency Resource Standard (EERS) in 2009 that call for 15 percent energy savings by 2015. Delaware, as the chart below illustrates, has a long way to go. 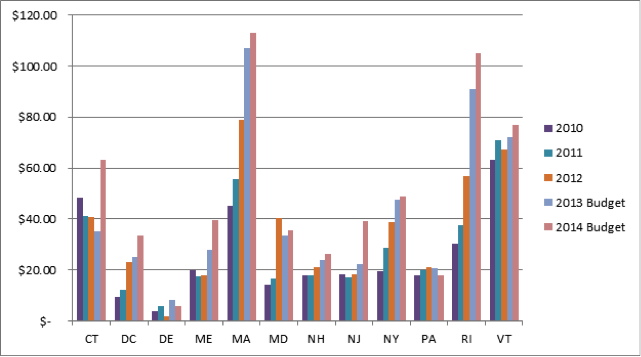 But if Senator Harris McDowell decided not to release the bill from his Energy & Transit Committee, what could efficiency and environmental advocates do? Could business voices finally help turn the tide? Was there a solution that could essentially make everyone happy?

Huzzah! They found a way. A clever parliamentary maneuver inserted an amendment to Senate Bill 150, revising operations of the Sustainable Energy Utility (SEU), and also bringing forth the major components of HB 179. The amendment calls for the expansion of cost-effective electric and natural gas efficiency programs, allows utilities to deliver programs and recover the costs through rates, and specifies that they will operate in partnership with SEU under the guidance of a stakeholder advisory committee.

The bill requires the energy providers — namely Delmarva Power and Light — to submit three-year plans and budgets with savings goals, evaluation measurement and verification, cost effectiveness screening, and the like. The bill makes clear there is a strong role for the SEU going forward, which will continue to offer an array of residential and business programs in coordination with Delmarva and the state’s municipal electric companies and rural electric cooperatives. Chairman McDowell joined all 20 of his senate colleagues voting “yea” to pass SB 150 as amended. The House voted in favor, 37-4.

Governor Jack Markell is expected to sign the bill into law within the next couple of days, bringing Delaware into the fold of the other 10 Northeast states (and the District of Columbia) that offer ratepayer-funded energy efficiency programs. The new model is expected to support hundreds of jobs annually, and will help the state meet climate and environmental goals as well.

NEEP worked hard with our allies, including Delaware Interfaith Power & Light, the Sierra Club, Opower, the Advanced Energy Economy,  Efficiency First, VEIC and a number of businesses in the efficiency sector to make the case for action this session.

It was gratifying to hear from DNREC Secretary Collin O’Mara that our letters of support were influential in helping legislators on both sides of the aisle to understand the potential of energy efficiency to deliver bill savings and help create jobs. As the state ramps up its efficiency programs and builds the policy and market frameworks to help Delawareans harness this least-cost resource.

NEEP looks forward to providing strategic and technical program and policy support in any way we can. We congratulate Delaware for this landmark achievement, and know that many states, advocates and business leaders are cheering today as well.