While the U.S. Department of Energy (DOE) had developed significant momentum updating appliance standards during President Obama’s first term, we have been disappointed in their ability to complete rulemakings of late. Over the past year and half, DOE has failed to meet deadlines for eight separate product categories. Such delays hold up effective dates for the new standards — sacrificing energy, economic and environmental savings each and every day they are not completed. 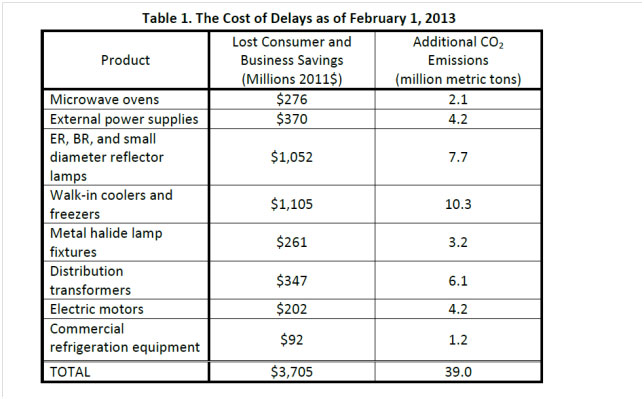 Source: Appliance Standards Awareness Project/ACEEE, Jan. 2013
A new analysis conducted by ASAP and ACEEE demonstrates the significance of the delay. According to the analysis, “the delays to date will cost (U.S.) consumers and businesses $3.7 billion in lost savings and will result in 40 million metric tons of additional CO2 emissions.” These delays at the national level ultimately affect the states and localities in the various regions of the country.  That’s why the Northeast has been so involved with ensuring the Department adopts strong federal rules. The Northeast Appliance Standards Project provided direct input into several of these product rulemakings, so it’s a shame to see their implementation, and associated economic and environmental benefits, jeopardized. One of the key purposes of the regional project is to bring the leadership and weight of our region to bear on the federal process, in a timely manner. We had expected the feds to hold up their end of the bargain. The President has made a commitment to taking action on energy efficiency in climate change in his second term. If he’s serious, he must ensure that the DOE makes the backlog on appliance standards a top priority.