Spring has brought forth a rush of activity on energy efficiency and energy policy in states in the NEEP region. Below is an overview of a major proceeding in New York, a roundup of state legislative and regulatory activity, and a new report on the cost of energy efficiency programs. New York Energy the Future of Utilities, Distributed Resources New York State has opened a major proceeding on the future of energy regulation and the electricity grid, entitled Reforming the Energy Vision, or “REV.” The sweeping April 2014 order and proposal issued by the New York Public Service Commission (PSC) will have major implications for the future of energy efficiency, distributed generation, and electric ratemaking in the Empire State and perhaps beyond. PSC Chair Audrey Zibelman said in a statement that New York seeks to “maximize the utilization of resources, and reduce the need for new infrastructure through expanded demand management, energy efficiency, renewable energy, distributed generation, and energy storage programs.”  At its core is an attempt to promote more customer-sided resources, including energy efficiency and distributed generation in order to reduce the costs of meeting New York’s peak electricity demand and the state’s carbon emissions. The REV initiative will touch on six areas of energy policy: customer knowledge, market animation, system-wide efficiency, fuels and resource diversity, system reliability and resiliency, and carbon reduction — as outlined in the PSC order and staff proposal. The REV proceeding will have two tracks: the first will examine the role of distribution companies in enabling new energy resources, which will take place in late spring and early summer. The second track will deal with the type of ratemaking and cost recovery that will enable utility providers to undertake the programs envisioned in track one, and will be launched late this summer and run into the fall. Additionally, the NY PSC has laid forth a plan in Case 14-M-0094 to create a new Clean Energy Fund that will combine its three major clean energy programs: the Energy Efficiency Portfolio Standard (EEPS), the Renewable Portfolio Standard (RPS), and its Technology and Market Development (T&MD) portfolio. Here, the Commission is seeking to improve coordination between programs and begin the transition away from “exclusive reliance on ratepayer surcharges” and towards tariffs and market-based financing during the next five years. NYSERDA will begin this important undertaking with a stakeholder input process this summer, with an initial proposal due by August 13. A rough schedule for the proceeding and when the Commission will take public comments is available online. NEEP will continue to monitor these important proceedings and provide further insights in future editions of Highlights. Legislative Developments We do our best to monitor legislatures in 12 states to keep tabs on the key budget and lawmaking developments that will impact energy efficiency programs and policy. A full list of the legislation that we track is available here. Below are a few of the bills we’re keeping a close eye on: Regulatory Policy Several states are moving forward on their energy efficiency program filings for the coming year and are at or near approval: Data Moment: Lawrence Berkeley Laboratory’s Cost of Saved Energy Report Energy efficiency continues to be our least-cost energy resource, but it can be difficult to compare the “production cost” of energy efficiency resources with traditional energy supply options (i.e., the unit cost per MWh or MW saved). NEEP has been working to ensure greater consistency in reporting on energy efficiency programs with our Regional Energy Efficiency Database (REED). As part of these efforts, we provided input on a helpful new report from Lawrence Berkeley Laboratory, “The Program Administrator Cost of Saved Energy for Utility Customer-Funded Energy Efficiency Programs.” While the title doesn’t exactly roll off the tongue, the report provides useful and digestible information for policymakers on how much energy efficiency programs cost, comparing program types, savings, and expenditures from EE programs in 31 states. Below, we have included three figures from the report to highlight some of its most useful findings. The first figure compares the average measure lifetime for different categories of programs, which range from 5 years for a few appliance-related programs to over 30 years from some new construction programs: 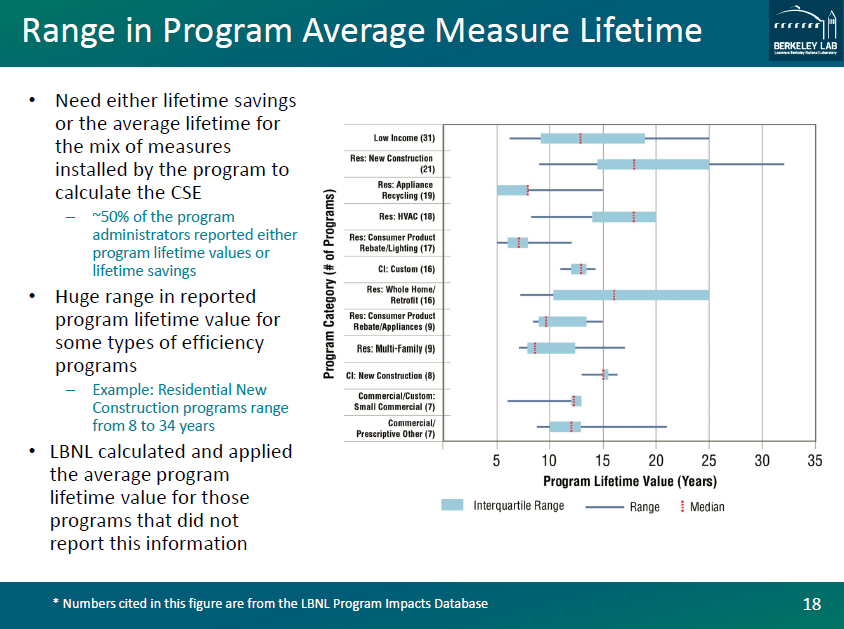 The next figure shows the cost of saved energy (CSE) by sector on a national basis, which have a median of between $0.03 per kWh for C&I programs to about $.07 per kWh for low-income programs: 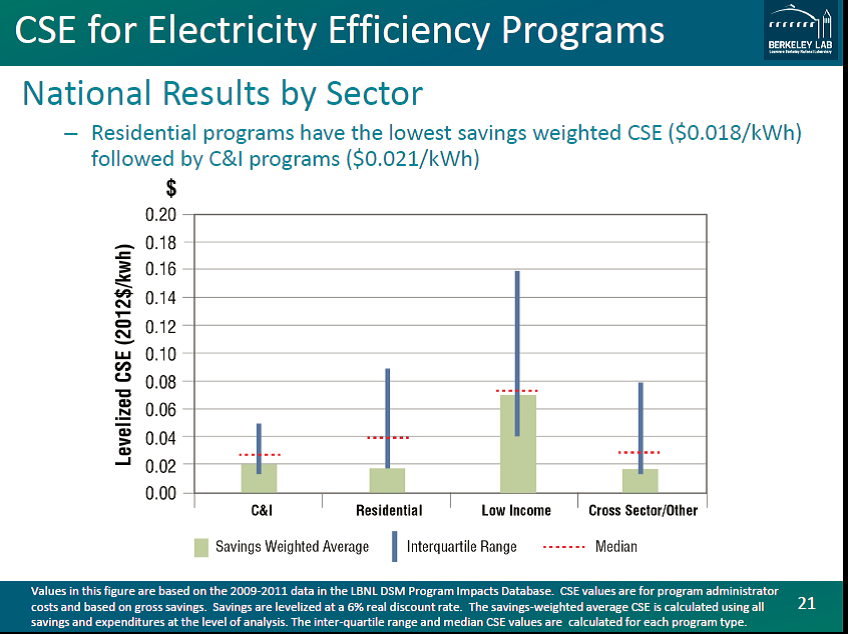 The final figure shows the cost of saved energy for the states includes in the report. Programs in the Northeast tend to be on the high end, given their aggressive portfolio, between $0.03 and $0.05 per kWh, but still well below the cost of new supply: 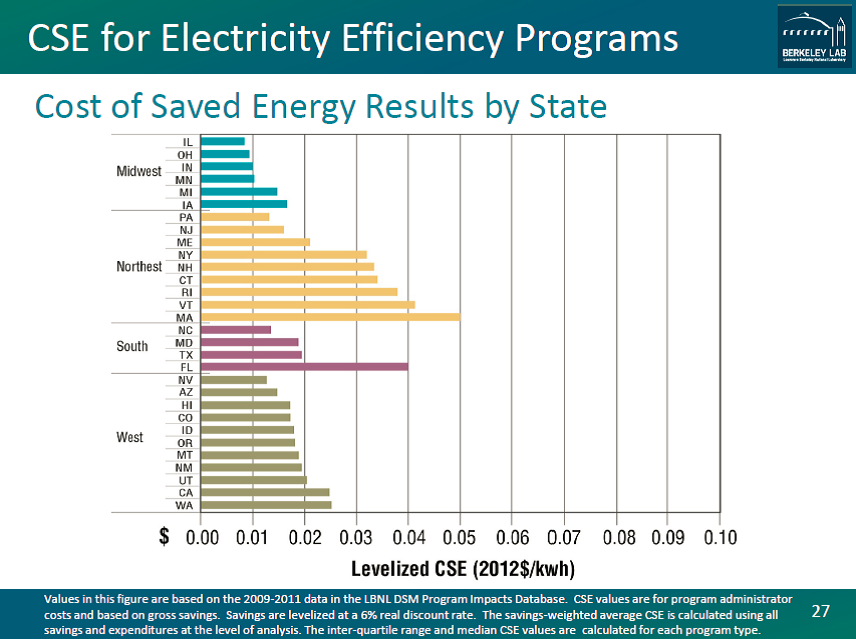 We encourage readers to take a closer look at the Northeast states by exploring the information in our REED database, which now includes energy savings, spendings, and emissions data from states in the NEEP region for 2011 and 2012.
Tags policy tracker