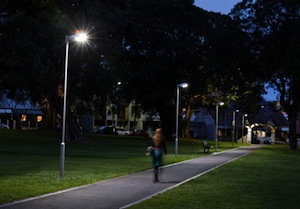 Guest Contribution by Kevin Galligan, Program Manager at Cape Light Compact When was the last time you paid attention to a street light?  Probably only when one is burned out, right? Most of us don’t think about street lighting because we just expect it to be there when we need it. But for cities and towns, street lighting is never far from mind.  While most people drive past streetlights and don’t think twice about them, for town officials they are actually a big energy hog. But now, with new lighting technologies, street lighting holds opportunities for huge energy savings.  As part of their mission to promote energy efficiency, Cape Light Compact is working with towns across the Cape and Vineyard to convert town-owned streetlights to LED fixtures. Starting in January 2013, 140 streetlights will be retrofit in both commercial and residential areas. Cities and towns all over America have been undergoing comprehensive overhauls of their street lighting infrastructure and moving to LED to help ease energy budgets.  According to a report published by The Lighting Group this year, “Public street and park lighting accounts for 1-3% of total electricity demand, depending on the region, and up to 40% of the electricity bill of local authorities.” 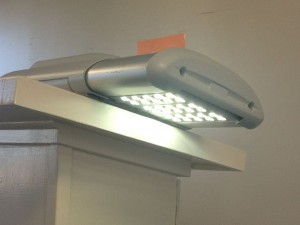 Recently Cape Light Compact invited a representative from the lighting manufacturer, Omnilite, to give a presentation about the streetlights to DPW representatives from across Cape Cod.  In his presentation, Steve Zimmer pointed out that there many more benefits to LED technology which this energy efficient lighting technology will benefit local communities: -          LEDs give off a brighter and truer light than traditional high-pressure sodium lights, they make driving and walking on roadways safer. With the Cape’s notorious summer traffic, better lighting will help to alleviate the dangers that come with too many cars on the road. -          Rather than being one size fits all, LEDs can be tailored to each application, with each individual bulb being adjusted to properly light a wide or narrow street. -          With a life expectancy of 30 years, LED maintenance is much lower than traditional lights that last only 4-5 years. Not only do LED lights lower energy costs but the towns’ maintenance costs will be lower as well. -          Many towns on Cape own their streetlights, so they can directly implement energy efficiency upgrades without going through the utility. Because of these tariff reductions, this also helps return more savings to towns. -          Towns have the option to buy additional features to the lighting systems that can maximize savings and can customize these systems for individual town needs. According to The Lighting Group Report,  municipal street lighting is also one sector in particular that can support local jobs, especially where specifications for new products can vary substantially from one neighborhood to another. “The potential for an infrastructure renewal investment in LED lighting of up to US$20 - 30 billion in the United States, for example, could generate thousands of new jobs.” A Perfect Fit for the Cape Cape Cod is always striving to balance the old with the new, tradition with innovation, and the seasonal with the year-round. These lights are uniquely positioned to balance energy savings, roadway safety and historic preservation. Although they are brighter than traditional lamps, LEDs have a “light loss” factor that needs to be figured into lighting calculations so they don’t light up what they shouldn’t.  Light from an LED lamp is very directionally focused, directing 90 percent of their light downward so the road would be illuminated while the surrounding areas would not be subject to adverse light pollution. Essentially, these new streetlights will light one side of the fence but not the other. This makes them a good fit for historically sensitive areas, as they help to ensure the safety of motorists and provide economic and environmental benefits without altering the character of the neighborhoods.  In addition the technology  diminishes the amount of ambient light that escapes into the sky, making it easier to see stars – an important feature in Cape Cod communities. Existing LED Installations on Cape Cod 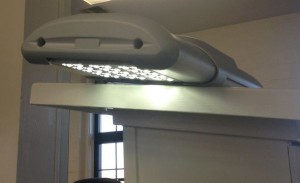 Cape Light Compact will begin installing the new lights in the new year, and will report back on the progress.  In the meantime, for an idea of how LED lighting looks on the Cape, check out the Barnstable County Complex after dark.  Here you can get a great perspective of howe LEDs light a broad spectrum of colors on the cars parked in the lot. To get an idea of the “light loss” factor, the best vantage point is from the top of the hill in front of the old jail overlooking the entire complex and Barnstable Harbor. For more information contact Cape Light Compact or like Cape Light Compact's Facebook page for regular updates. Kevin Galligan  is a Program Manager at Cape Light Compact. He has 30 years of engineering experience and has managed Cape Light Compact’s Energy Efficiency Programs for the last 10 years. He is also an Energy Efficiency Instructor at Cape Cod Community College.