After many years of successful yet limited energy efficiency programs, New Hampshire is taking concrete steps to ramp up its investments in energy efficiency, likely through the creation of an Energy Efficiency Resource Standard (EERS).

This past May, the New Hampshire Public Utilities Commission (PUC) initiated a proceeding to establish an EERS under docket DE-15-137. An EERS establishes short- and long-term energy savings on a statewide scale, allowing regulatory bodies to annually increase energy savings. Currently, about half of the states  in the U.S. have funded EERS policies.

The PUC staff is currently hosting a series of stakeholder sessions to gather input on topics including targets, funding, and rate design, with opportunities for intervening parties and other stakeholders to weigh in before the utilities make their filings on November 2. The calendar calls for the proceeding to wrap up in the spring of 2016, with the expectation that the PUC commissioners will issue a final ruling in mid-April. Docketed materials can be found here, with supporting materials at this link.

Establishing an EERS would be a significant step for New Hampshire, as the state has lagged behind other Northeast states, in terms of energy-efficiency initiatives. In 2014, ACEEE ranked New Hampshire twenty-second out of the fifty states and the District of Columbia for energy-efficiency policies and programs. Although this ranking is close to the national median, New Hampshire ranks below many northeastern states, such as Massachusetts (ranked #1), Rhode Island and Vermont (tied for #3), and Connecticut (#6).

A potential EERS would build upon the CORE Electric Energy Efficiency Programs, which began in May 2002. The Core programs are a compilation of the efficiency programs offered by utility companies in New Hampshire. 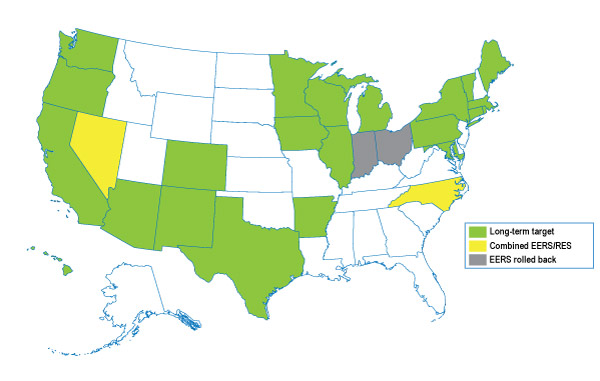 In early February, the NHPUC Commission Staff released a report called “Energy Efficiency Resource Standard: A Straw Proposal for New Hampshire.” This straw proposal included recommendations on how the state could set up an EERS. The recommendations included enacting the EERS through the NHPUC, establishing electrical and gas savings targets for the next ten years, expanding consumer-related energy savings initiatives, and examining private funding sources.

The Commission Staff also suggested basing electric and gas savings off of the amount of energy used in 2012. By 2025, cumulative electric and gas savings goals in the Straw Proposal are 9.76 percent and 6.91 percent, respectively. The incremental savings (the reduction in energy usage in a given year based on actions taken in that year) would increase from 0.65 percent to 1.31 percent from 2015 to 2025 for electric savings, and would be 0.70 percent for natural gas savings. The most aggressive energy-efficiency incremental savings targets in the United States are 2.6 percent for electricity (Massachusetts) and 1.5 percent for natural gas (Minnesota), about double the savings proposed in New Hampshire.

Now that the NHPUC has initiated a proceeding to establish an EERS, a prehearing conference will be held on June 3, 2015; at this conference, interested parties, such as electric and natural gas distribution utilities, may provide preliminary statements and may help the Commission Staff develop a schedule for the procedure.

The initiated proceeding is a promising step for energy-efficiency improvements in New Hampshire.  NEEP applauds the Commission’s decision to explore an EERS and will continue to monitor developments in the state, offering technical assistance and guidance to help interested parties and consumers maximize the broad benefits associated with such a standard.