Since our last update for Highlights in August, the following code adoption progress has occurred:

Vermont and Maryland became the first states in the nation to adopt the 2015 International Energy Conservation Code (IECC)—the latest and most energy efficient model code. Vermont’s new code was adopted in December and became fully effective in March. Vermont is also in the process of implementing its first Stretch Codes, which deliver additional energy savings beyond the base energy code: it has developed its residential Stretch Code, which will become effective this December, and are in the process of finalizing its Commercial Stretch Code. Maryland’s new code, which did not include any significant weakening amendments, was also adopted at the end of last year, and counties have until July to modify their codes accordingly.

New York adopted the 2012 IECC/ASHRAE 90.1-2010 for commercial construction last fall. The code was adopted in November and became fully effective in January.

In addition, as of April 1 all nonresidential construction in the City of Baltimore must now meet the 2012 International Green Construction Code (IgCC) or one of the designated alternative compliance paths. Baltimore is among the first cities in the country to adopt this national green code, which includes provisions for site, material, and water use as well as energy.

In the next few months:

In addition to the above progress, and following a national trend, there have also been a series of bills filed this year that seek to weaken building energy codes by promoting local determination of enforcement requirements and elongation of code adoption cycles. In our region, such efforts have surfaced in New Hampshire, Maryland, Maine, and Pennsylvania. 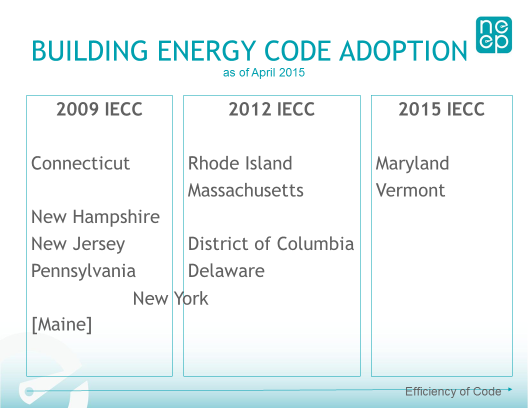 This year, NEEP released the first versions of its new Code Adoption and Code Compliance Toolkits, which are collections of state, regional, and national resources developed to aid building energy code development, adoption, compliance, and enforcement. The resources are presented in the form of hyperlinks that have been indexed for easy searching.

The Code Adoption Toolkit includes links to materials such as: code analyses and comparisons; state amendments and model language; and code case studies and talking points for topics such as stretch codes and the non-energy benefits of codes.

These toolkits are updated regularly. Be sure to visit NEEP’s Building Energy Codes page for the latest version, and contact Kevin Rose or Darren Port with any inquiries.