Renters and Weatherization: A Match Made by Mass Save

I’ll be honest – I didn’t think that home insulation would be a holiday party conversation for me just six months into my being at NEEP, but I was wrong. I was having a group of friends over in December, and when someone mentioned that they recently worked with a home energy auditor for free I immediately said “oh my gosh, through the Mass Save program for renters??” So yes, my party had it all! Cookies, drinks, and very informative conversation about weatherization assistance.

I had already talked to one of my roommates about how we should take advantage of Mass Save’s No-Cost Home Energy Assessments for Renters, and this was the push I needed to get it done.

In early January, we had an appointment with the Mass Save home energy auditor. As I walked through the house with him, we talked about the program and the most suitable energy efficient upgrades for my home.

After finishing the audit, it was pretty clear what the source of most of the issues is – it’s an old house. It’s around 100 years old, so it was built to standards much less efficient than today’s energy codes. On top of that, the landlord has been slow to make upgrades. This situation isn’t unusual in the Northeast, an area that has some of the oldest housing in the country.

As we continued to tour the house, the energy auditor drilled into a wall and shined his flashlight to look at the insulation situation but it was nonexistent! He also described the charming exposed wood and beams in my top-floor bedroom as “the roof”. Once again, zero insulation. No wonder I can hear rain and small falling branches so clearly. 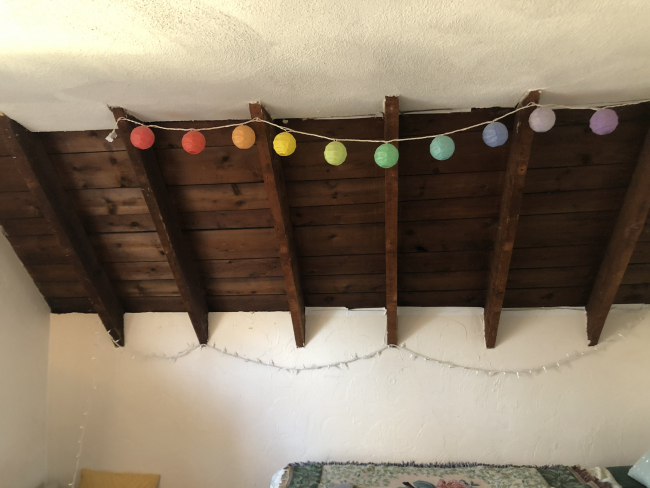 After touring the whole house and talking me through options like air sealing the basement, weather stripping the exterior doors, and insulating the exterior walls, he said he’d write up and send his assessment. From there, we would need to get approval from our landlord and schedule an appointment with a contractor to do the work, all at no cost to us.

The Mass Save program is funded by the energy efficiency surcharge that all state utility customers pay on their monthly bill. Because of this, they can offer 100 percent free services to renters in the state. The auditor said that Mass Save raised the benefit from 75 percent coverage of the payment because many landlords were unwilling to pay anything for energy efficient upgrades.

This gets at the core of the split incentive that exists between renters and landlords. Most landlords don’t pay the utility bills, so they don’t have the incentive to invest in upgrades that will reduce energy costs. Renters who do pay for the home’s energy don’t usually have the agency to make upgrades. I live in a six-bedroom, three-story single family home, and we paid over $350 for gas this December. Last February, gas was over $500.

NEEP created A Guide for Renting and Creating Lower Cost Energy Efficient Apartments and Homes, which is a great resource that helps renters understand the energy efficiency attributes in a rental unit and outlines changes they can make on their own. Utility and government programs offer the next step, which is helping to improve the rental housing stock itself. By removing cost barriers entirely, Mass Save’s program enables renters and property owners to make upgrades that improve the comfort and affordability of the home. If the heating comes from fossil fuels, they can also achieve great emissions reductions.

Programs like this are critical for making the building decarbonization process just and equitable. Old buildings that have seen few upgrades since they were built represent a challenge for decarbonization, and they often house renters and people with low to moderate incomes. If policymakers and program administrators don’t proactively address split incentives and disproportionate energy burdens, renters will be some of the last people left stranded paying for uncomfortable, increasingly expensive, and emissions-heavy housing.

I’m optimistic that our landlord will sign off on basement air sealing, weather stripping for the doors, and insulation for the exterior walls. Hopefully our bills won’t be a source of stress this winter, and I’ll be able to sit downstairs without my fingers and toes going numb. Those aren’t huge asks, right? If all goes according to plan, I might just be back on the NEEP blog in a little while with part two!