Editor's Note: Subsequent to this article's publication, ConEdison's draft ETIP filing outlined performance incentives between five and ten percent of the their program portfolio, according to how cost-effectively savings are achieved within pre-set program budgets.

Brooklyn native Willie Sutton—arguably the most prolific bank robber of the 20th century— escaped from three different prisons and stole more than $2 million during his lifetime.  When reporters questioned Sutton about why he had robbed so many banks, his reply was simple:

“Because that’s where the money is.”

Sutton may be long gone, but his line of reasoning survives and can tell us something about how state-actors might motivate regulated industries.  In the electricity industry in particular, highly cost-effective approaches to demand side management are at times overlooked because their incentive structures are not on equal footing with similarly situated investments in distribution or transmission.

This paradigm is changing.

The below examination of incentives granted by the NYS PSC for Con Edison’s geo-targeted Brooklyn Queens Demand Management Project (BQDM) can tell us something about how it will change.  But first, we offer some background on Geo-targeting:

Geo-targeting is the intentional targeting of efficiency programs to a constrained geographic area to defer utility transmission system investments. It also goes by several other names, including non-wires alternatives, and transmission and distribution (T&D) deferment. Geo-targeting is at the forefront of a new path in energy efficiency: integrating services, replacing aging infrastructure, addressing equipment failures, and most importantly, creating savings across the U.S. For example, in New England, estimates of avoided T&D costs range from about $30 per kW/year to about $200 per kW/year.

NEEP’s EM&V Forum recently issued a report that highlights many T&D micro-targeted deferment projects nationwide like the BQDM project, and projects that happened at the very beginning of geo-targeted T&D deferral development like the Portland General Electric project in the early 1990’s. The study offers insights regarding overall outcomes of T&D deferment, like how cost-effective micro targeted T&D deferment can be and how much industry integration is needed to pull it off, while also offering four main policy recommendations to help states implement micro-targeted T&D deferrals.  In 2015, NEEP will beginning scoping an assessment of whether cost-effective geo-targeted alternatives might also relieve constraints associated with gas distribution infrastructure bottlenecks. 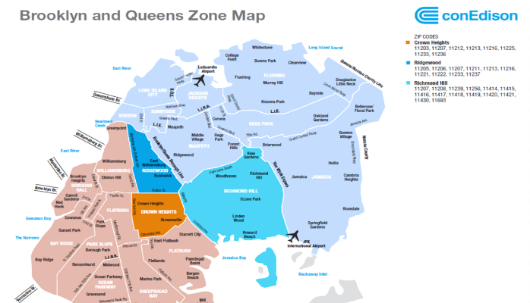 Con Edison was one of the first utilities to deploy geo-targeting strategies, starting in 2003 when they were about to hit peak load capacity. This started out in nine network areas and then expanded to over 21. In 2013, Con Edison proposed their $200 million BQDM project to mitigate the immediate need for a new power station in the Brooklyn/Queens area that would have cost around $1 billion. The main idea behind the project is to invest money in several different types of load deferment such as customer-side load management programs, rather than investing in a new substation. The goal of the program is to drop 52 megawatts of load from the Brooklyn/ Queens area by 2018.

As one of the most prominent examples of geo-targeting today, the BQDM program and associated incentive structures will likely inform the ratemaking reforms New York in contemplating for their REV Track II Straw Proposal, pending July 28, 2015. The Reforming the Energy Vision proceeding in New York aims to change the way utilities earn their funding.  Instead of the standard price setting done by utilities (cost of service ratemaking), New York is contemplating the value of performance-based ratemaking, where utility incentives are set with benchmarks to meet, and the utility revenues are adjusted based upon performance outcomes.

While the transition to an integrated market system is only just beginning to take hold in New York, it is not unreasonable to think that geo-targeted T&D deferrals will become common place in the utility industry in the coming years. This can be seen in all the ongoing projects that use geo-targeting, like the Pacific Gas and Electric (PG&E) Model Energy Communities Program in California, and the Boothbay pilot project in Maine.  Key to the proliferation of these geo-targeted projects—and DER proliferation in general—will be whether rate structures and utility incentives can place DERs on an even footing with traditional regulated investments moving forward.  To accomplish this, regulators may have to reconsider “where the money is.”