Can Maryland Hold the Line on its Commitments to Energy Efficiency?

In a move that positioned Maryland as a national leader on energy efficiency, last June the Maryland Public Service Commission issued an Order extending the state’s successful EmPOWER Maryland programs while also directing program administrators to develop comprehensive gas efficiency programs, and reach for savings at two percent of retail sales for the electric programs. And less than two months ago, the state also doubled down on its commitment to reduce carbon emissions with enactment of the Greenhouse Gas Emission Reduction Act.  Will energy efficiency play a role in achieving these committments?  Read on to find out...

Maryland ratepayers have benefited from a robust portfolio of energy efficiency programs since passage of the EmPOWER Act in 2008, saving consumers over $4.089 billion on their energy bills. During the administration of former Governor Martin O’Malley, who went on to make clean energy the central tenet of his campaign for the Democratic presidential nomination,  Maryland rose from 20th to 7th on ACEEE’s annual scorecard of energy efficiency policies.

The Maryland Energy Administration (MEA) is a unit of state government whose mission is “to promote affordable, secure, and safe energy while maintaining energy independence, sustainability, and reliability through innovative and effective policies, programs, technologies, and financing mechanisms.”  As the EmPOWER Maryland programs were being enacted and implemented, the MEA played a critical role in voicing support for them before the Public Service Commission.

As part of its oversight of the EmPOWER energy efficiency programs, the Public Service Commission holds hearings twice a year to evaluate the program administrators’ performance during the previous two quarters, giving administrators the chance to make formal adjustments to programs.  During the last September’s set of semi-annual hearings, filed comments before the Commission recommending a denial of funding for EmPOWER’s planned program expansion, citing “… the Administration’s concern over authorizing new fees, surcharges and taxes on Maryland residents…”

The Commission ultimately granted the majority of the program funding expansion requests.

Earlier this month, the Public Service Commission prepared to hold its next set of semi-annual hearings. Those hearings were unique because, supplemental to the normal subject matter of program planning and evaluation, the Commission was also considering the recommendations of recently convened working groups regarding natural gas program expansion and limited income programs.

Ultimately, the Commission approved program funding expansion.  However, they declined "[T]o adopt specific natural gas energy efficiency therm savings goals at this time," while also noting that they "Look forward to the review of cost-effective and appropriate proposals by natural gas companies." Attached to the Commission's Order was a concurring statment from Commissioner Richard, describing his "[H]ope that collaboration [between the administration and MEA] will result in programs that rely less on Utilities imposing fees on their customers and more on using the state’s Strategic Energy Investment Funds and on innovative subsidy-neutral programs."

Shortly after the early May hearings, the Hogan administration announced Dr. Mary Beth Tung, a former Deputy Secretary in Hogan’s Department of the Environment, would be taking over as Director of the MEA.

Energy Efficiency and the Path Toward Emission Reductions 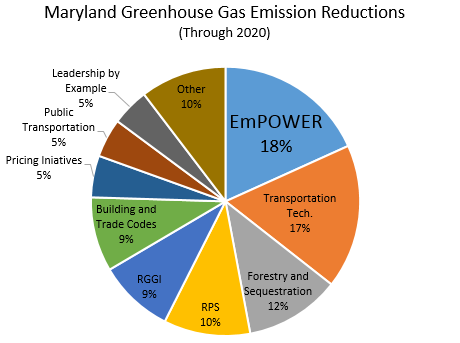 Dr. Tung was Deputy Secretary of the Maryland Department of the Environment when it issued its 2015 Greenhouse Gas Emissions Reduction Act Plan Update, which provided an inventory of Maryland’s greenhouse gas emissions and actions being taken to limit those emission. It also identified the EmPOWER Maryland program as the largest single source of emission reductions.

The chart to the right shows the categories of emission reduction identified by the Department and their percentage of total emissions reductions through 2020. The update projects that Maryland will surpass its greenhouse gas emission reduction goals by ~10 percent. After publication of the update, the Maryland legislature set even more aggressive reduction goals, as mentioned earlier.

To reach these goals, it will be immensely important for the five member Maryland Public Service Commission — to which Gov. Hogan will appoint his third Commissioner this summer — to hold the line on the state’s commitments to energy efficiency.