Live updates from the Comment Hearings 10/8/2013: The big news is that RE-166, the mechanical equipment trade-off proposal constituting a massive energy code rollback, was disapproved 76-52, overturning committee action. The rest of the changes have been more mild: Gains: Losses: Neutral: A battle is looming over efforts to update the International Energy Conservation Code (IECC), which will take place Oct 5-10 in Atlantic City at the International Code Council Public Comment Hearings.  The new IECC, recognized by federal statute as America’s model energy code, will be voted on by local and state officials from across the nation. While building energy codes may not sound sexy, one could argue that from a national energy policy perspective they are a veritable Hugh Jackman! Buildings use 42% of all US energy, 54% of its natural gas, and 71% of its electricity. They also cause 39% of America’s greenhouse gas emissions; a 2009 McKinsey report called building energy efficiency measures THE most cost effective way to reduce GHG emissions. 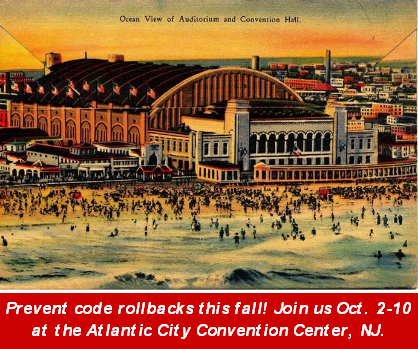 Every three years at the ICC Public Comment Hearings, state and local government employees and elected officials have the opportunity to vote on the next generation of building energy codes. (Learn more about the national code update process in NEEP’s Model Progressive Building Energy Codes Policy.) The last update produced the 2012 IECC (which the US Department of Energy called “the largest, one-step efficiency increase in the history of the national model energy code”); the October meeting will complete action on the 2015 update. The question is whether the 2015 IECC will continue to move forward— or roll back. Opponents of energy efficiency have offered several proposals that will weaken efficiency — one, which reinstates an equipment trade-off loophole that has been out of the code since the 2006 version, allowing the construction of new homes that use 20+ percent more energy than those meeting the 2012. Backsliding on 2012 IECC will lock in building inefficiency for three to five generations by building new homes that will waste energy for 60, 80, even 100+ years. In contrast, proponents of continued improvements have proposed a modest 5% efficiency gain over the 2012.  “Builder Flex Beyond the 2012” offers builders a flexible set of options to meet that gain and has won the unanimous endorsement of the US Conference of Mayors. Efficiency opponents, led by the National Association of Home Builders (NAHB) and the wood industry, are doing everything possible to not only prevent this code update from taking place, but even roll back as much as two-thirds of the 32% efficiency gains achieved with the 2012 code. The NAHB argues, predictably, that efficiency adds too much to the cost of a new home, ignoring the results of their own March 2013 poll that found 9 out of 10 homebuyers will pay 2-3% more for a home with permanent efficiency features. New home cost estimates by both the US Department of Energy and the Building Code Assistance Project put the added cost of the 2012 IECC at 1-2%. But what’s most significant are the energy savings: after quickly recouping those added efficiency investments — higher standards could put thousands of dollars in the homeowner’s wallet over a typical 30-year mortgage.  According to the US Department of Energy, an average New Yorker purchasing a home meeting the 2012 IECC — which will become the building energy code for the Empire State next year — will pocket $9,777 over the typical 30-year mortgage life. These savings are real dollars that will stay with the homeowner. It is particularly ironic that this battle is taking place in Atlantic City, since that city sustained estimated losses of over $50 million in lost business after Hurricane Sandy last year — a storm which climate scientists say we can expect many more of in coming years, due to the increasing buildup of greenhouse gases in the atmosphere. Even more irony: HUD’s “Sandy Rebuilding Task Force” report calls for “Making housing units — both individual and multi-family – more sustainable and resilient through smart recovery steps including elevating above flood risk and increased energy efficiency” — which can be achieved by advancing the energy code!

Allison Webster, Senior Building Energy Policy Associate
The fate of the 2015 energy code rests in the hands of those state and local officials voting in Atlantic City. Therefore, getting as many energy efficiency supporters to participate at the ICC Public Comment Hearings will be critically important this October. For more information about available travel support or ways to get involved, please contact Allison Webster from NEEP’s Buildings Team. Special thanks to Emily Norton for her writing contributions.
Tags 2006 IECC 2012 IECC 2015 IECC Building Energy Codes ghg greenhouse gas emissions International Energy Conservation Code National association of homebuilders