Climate change can feel like a really big, daunting, global problem that is too hard to solve on a small scale, but many towns and communities in the Northeast are doing just that. Almost all of the states in the Northeast and Mid-Atlantic have set goals for reducing their contributions to climate change, and now NEEP has set out to document the towns and cities that have followed suit, committing to specific energy use or greenhouse gas emissions reductions with a deadline. 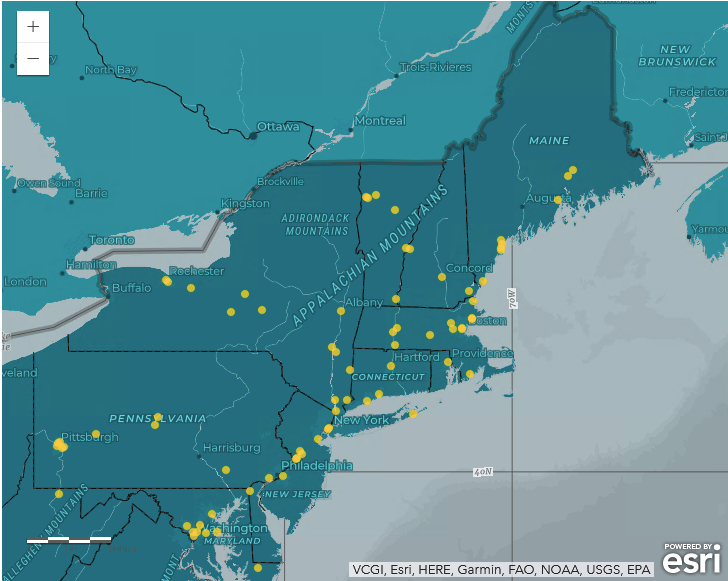 NEEP recently published the Community Commitments Tracker, an interactive web-based map where people can explore some of the local climate goals in our region and learn more information about them. Some of the most common are 80 percent reductions in greenhouse gas emissions by 2050 and net zero emissions by 2050 (or sooner). Many also include intermediate goals, or distinctions between municipal and community-wide energy use/emissions. At this time, there appears to be no other such tool that is tracking efforts at the local level on a regional scale.

In addition to commitments shown in the tracker itself, we’re interested in learning more about the people and agencies overseeing these goals. We want to not only show where these goals exist, but also to connect people, build relationships with local climate champions, and support our region in collectively achieving its goals.

The focus of this tracker is on small- to medium-sized towns and cities. While major cities such as New York City, Philadelphia, and Boston have important goals, they are not currently featured on this. We intentionally chose to do this because smaller local governments typically don’t have the same level of resources as major cities, and might not have positions dedicated to working on these initiatives like a full-time energy manager. We are really excited about these smaller governments making big commitments, and we think that this project has great potential to help build unity among towns and cities with similar goals, obstacles, and resources.

The first iteration of our map has 75 towns and cities, but we know this isn’t exhaustive and we’re continuing to add to it. If you work with or for a local government, or you live in a town with a commitment that we don’t have, please let us know here so we can include it on our map.

We hope this resource will be helpful to towns and cities across our region that are working at the local level to address climate change and plan a more sustainable future.