Outside my window in Boston, Massachusetts is a bright winter wonderland. It feels like forever since we’ve seen snow quite like this. Watching the mesmerizing dance of snowflakes and hearing the muffled sounds of wind and diligent snow shovelers offers the perfect time for some introspection about all that has happened this year. What a year it has been!

2020 turned out to be what felt like a decade of large-scale nation and global altering events all packed into one. The global pandemic, civil unrest over social and racial justice, and a presidential election shook the foundation of daily life. These events have all dramatically shaped the direction of energy efficiency policy as we move into a new year. Let’s take a look.

No doubt, COVID-19 was the biggest disruptive force in policy, which caused legislators, regulators, and executives scrambling to put health, safety, and economic security measures in place. Things began with moratoriums on utility shut offs and transitioned to arrearage management, financial aid, and reducing energy bills. As of December 7 four states in the Northeast have active COVID emergency moratoriums in place. However 12 of the 13 states in the region have annual winter moratoriums that will end at various times in the spring. Massachusetts established the Customer Assistance Plan which provides extended arrearage payment plans and extended arrearage management plans for low income residential customers and started a small commercial arrearage forgiveness program (AFP). 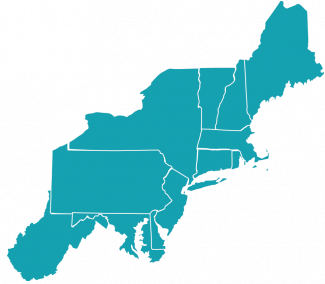 Connecticut targeted contractors to lend support and resources to navigate COVID-19 impacts using the Contractor Technical Advisory Committee. The Connecticut Department of Energy and Environmental Protection (CT DEEP) released health and safety protocols, developed with stakeholder input, to aid those returning to work on energy efficiency programs. Other states increased funding for energy efficiency measures to reduce customer utility bills and encourage participation by contractors as they re-enter the market. For example, New Hampshire increased the Residential Home Energy Assistance Program incentive cap from 8,000 to 20,000 and added a number of C&I prescriptive and custom incentives. In New York, NYSERDA implemented a number of program changes that extended deadlines, loosened requirements, increased financing for weatherization, and developed the workforce. The region also saw an increase in the use of virtual tools to safely continue performing a number of tasks like virtual energy assessments. For more information and resources, visit our COVID-19 Resource Page

The activism that burst forth over the spring caused many to acknowledge the social inequalities that remain hidden beneath the surface. These topics have always been discussed in the energy efficiency world but increased attention and vigor were given. There is an increased focus on exploring and solving energy equity, environmental and energy justice, energy burdens, and workforce development.

In May, New Jersey Introduced bill, S2484, An Act concerning clean energy and energy efficiency programs for overburdened communities. In November it unanimously passed through the senate and is being considered by the General Assembly. The bill establishes the Office of Clean Energy Equity within the Board of Public Utilities (BPU). The new office would be required to establish on-site or community solar programs that benefit 250,000 low income households as well as various energy efficiency programs such as installing at least 400 MW of energy storage by 2030. The office is directed to work with local community members and on the ground organizations to achieve these goals in the best ways possible.

Connecticut’s Department of Energy and Environmental Protection (CT DEEP) launched the Equitable Energy Efficiency proceeding to define equity in the context of energy efficiency and to expand inclusion and participation within underserved communities. The proceeding identifies a number of possible areas of improvement and action such as addressing health and safety concerns like lead or asbestos, which can restrict home improvement, restructuring utility performance incentives to align with equity goals, and how to improve outreach and education. CT DEEP engaged a wide range of stakeholders and requested written comment.

Vice President Biden’s victory has the energy and environmental community excited for increased attention, credibility, and funding to accelerate carbon reduction projects. The big presidential win for Democrats did not translate to the elections for state legislature. This year 44 states held a total of 86 races during the general elections. The end result? Pending the run-off elections in Georgia, only two chambers flipped party-majority. Both the New Hampshire house and the senate came under republican control. This is the fewest party control changes since 1944 where only four chambers flipped! After an uneventful general election for state legislatures, it will be interesting to see what happens in New Hampshire and how the state will interact with the largely Democratic Northeast region. 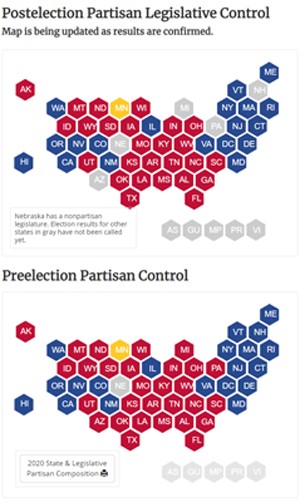 The Biden administration has been full steam ahead on Cabinet nominations. So far, he has announced picks for four climate and energy related cabinet positions. Jennifer Granholm, the former governor of Michigan was nominated for the position of Energy Secretary within the Department of Energy. Granholm brings experience in promoting clean energy manufacturing during her time rebuilding the auto industry after the 2008 recession. The Department of Energy leads research in areas key to addressing climate change such as shifting to renewable energy, energy storage, and reducing carbon emissions from buildings. Michael Regan, North Carolina’s environmental secretary and former EPA official, has been nominated to be the EPA Administrator. Regan recognizes the threat of climate change and worked on clean energy projects at the Environmental Defense Fund. During his time in North Caroline he created the Environmental Justice and Equity Advisory Board to help low-income and minority communities that disproportionately suffer environmental externalities. Regan’s commitment to the environment and marginalized communities is exciting to see.

The next two appointments focus directly on climate policy and do not require senate confirmations.  Gina McCarthy, Former EPA Administrator and current Chief Executive of the Natural Resource Defense Council (NRDC) will be the Domestic Climate Coordinator. McCarthy’s foreign counterpart will be Former Secretary of State John Kerry who Biden picked as his Special Presidential Envoy of Climate. McCarthy oversaw President Obama’s Clean Power Plan, the first national standard on power plant carbon emissions which was ultimately blocked by the Supreme Court. She also helped develop the Regional Greenhouse Gas Initiative (RGGI), a multistate greenhouse gas reduction program in the Northeast that many states utilize as a source of funding of energy efficiency improvements. The Domestic Climate Coordinator is tasked with coordinating efforts across the federal government to reduce the country’s carbon emissions. Internationally, John Kerry will work to reengage the United States in international climate diplomacy. Kerry played a role in negotiating the Paris Climate Accord, which Trump pulled the United States out of, and in the Montreal Protocol, an international initiative to phase out refrigerants with power greenhouse gas properties.

In the past few months a number of new bills and regulations were introduced covering a range of topics. Here are a few of note:

Both Massachusetts and New Hampshire introduced legislation exploring carbon pricing in Bill H778 – An Act Relative to Carbon Pricing from Massachusetts and bill HB735 – “Relative to carbon pricing” from New Hampshire. The Massachusetts policy mandates that the first seller of petroleum products and any distributor of electricity or natural gas would be responsible for paying a carbon price. The proposed price of carbon is $15 per metric ton of CO2e and would increase every fiscal year accounting for inflation beginning in fiscal year 2022. The funds collected from the program would be deposited in the Clean Energy Dividend Fund and annually distributed to every household and employer in the state including individuals and families that are homeless, in transition, or who otherwise may not receive checks in the mail.

New Hampshire’s policy identifies applicable entities as “the vendor of a carbon-based fuel, at the first point of sale within the state.” Similar to Massachusetts, the price will increase yearly but will begin at $20 per metric ton of CO2e. The gathered funds will be used to fund programs and incentives for low income households.

In Pennsylvania, Bill SB1297 set out to modify the state’s alternative energy portfolio standard (APS). The introduced bill would modify the APS to include a solar photovoltaic carve-out ensuring that a percentage of the Tier 1 Renewable Energy supply comes from solar. Beginning in June, electric distributors will be required to retail 0.7 percent solar energy. This will ratchet up every year until 2024 when the percentage will reach 1.75. The Bill also requires the Pennsylvania Public Utility Commission to prepare a report on renewable energy storage needs, opportunities, and benefits which will help inform a future target for energy storage deployment.

It is good to see Pennsylvania setting its sights on renewable energy and energy storage as these are key to the future of a decarbonized electric grid, but it’s not all good news in the state. House bill HR1088 is a resolution urging Pennsylvania’s Independent Regulatory Review Commission to reject the proposed carbon dioxide budget regulation associated with Regional Greenhouse Gas Initiative (RGGI). This is another attempt by the state congress to hinder Pennsylvania’s participation in the program. Earlier this year Governor Wolf vetoed a bill that would have added legislation making it very challenging for Pennsylvania to re-join RGGI. Given the Governor’s support of RGGI, this bill will most likely be vetoed if it makes it to his desk.

We are seeing a growing interest in time-of-use rates and the uptake of advanced meter infrastructure (AMI). In New York, Bill A08517 passed both chambers and is on its way to the governor for signing. The bill directs the PSC to study and report on time-of-use plans offered by the electric and gas utilities. The report will provide recommendations on AMI, how to use time-of-use effectively, and impacts to ratepayers. In New Jersey, two identical bills (A5063, S3192) were introduced to both the General Assembly and Senate in regards to the deployment of smart meter infrastructure. The bills direct electric public utilities to install and operate smart meter infrastructure in all new construction and in existing buildings upon request. Smart meters allow for the rapid feedback and analysis of energy usage data which is valuable for advanced evaluation and new demand response and time-of-use payment programs which can reduce periods of costly and dirty peak energy production.

Wishing you the best over the holidays as we look to a new year of energy efficiency and climate policy.