Rebuild it Right, A Tour of EcoBuilding Bargains 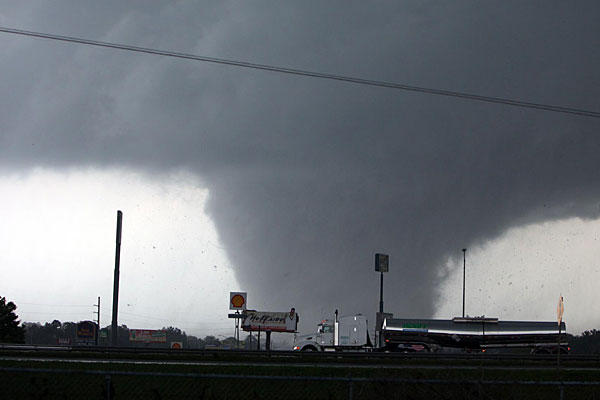 The Springfield tornado demolished more than 40 buildings and caused over $100 million in damages.
Natural disasters are here to stay and our communities need to be as prepared as possible and ready for any natural upheaval, anywhere, at any time. Preparing for natural disturbances, or even disasters, ahead of time is imperative to minimize potential damage and reduce fatality. The need for pre-planning was made especially apparent by the recent devastating Oklahoma tornadoes that stomped through the suburbs of Oklahoma City. A warning was sounded out to local communities as a tornado touched down approximately sixteen minutes later, travelling twenty long, destructive miles. The climate also sends along warning signals as it continues to change its usual patterns of behavior and is supplying a largely unpredictable array of climactic hindrances onto our normal flow of life. New England is attuned to the realities of powerful hurricanes that blow up our coast year in and out, snow storms that stop the show altogether, and torrentially-natured showers. However, true preparedness is tested when unprecedented natural disturbances emerge from thin air. The tornado that struck Springfield, Massachusetts just over two years ago blind-sided that community; when’s the last time you heard a tornado warning sound in New England? Once a decade? Maybe? Tornadoes in New England are about as common as snowflakes in Florida. Although pre-storm preparedness is crucial, these disturbances are going to continue to shout their war-cries across the surface of this planet, whether we are here or not. This implies that post-storm recovery can be just as important because of the inevitable nature of climatic climaxes. It begs the question, what are the best ways to rebuild, restructure, and empower recovering communities so they can rise up and thrive in the aftermath? The MA DOER and regional utility companies, quickly identified the implications energy efficiency had in the rebuilding phase in the aftermath of the Springfield tornado, and the Center for EcoTechnology was there with boots on the ground to help. “We saw a lot of damage dealt to a community in a very short period of time,” said John Majercak, CET’s Executive Director, “If the community has to rebuild one way or the other, why not take the opportunity to implement elements of energy efficiency, the community will only benefit in the long-run.” Energy efficiency care-packages included zero interest loans, robust incentive programs and strong outreach and support efforts supplied by utilities, federal/state agencies, and CET. Now, two years and three days later, Springfield is coasting down the other side of the hill. The local community tore off their band-aids, simultaneously increasing implemented energy efficiency across the board, and supplied other stricken communities with a model of practical improvement.

EcoBuilding Bargains before and after the energy efficiency retrofitting.
The Center for EcoTechnology also provides a model of energy efficiency retrofitting while offering a much needed service to the community. EcoBuilding Bargains is a CET facility, located in Springfield, that accepts donations of quality home improvement materials and sells them to the public at low prices. Their mission is to produce less waste by recycling building materials within the walls of a highly efficient, retrofitted building. They provided an old fossil with a new life; this 100 year old, 60,000 square foot complex now uses 88% less energy than it did before it underwent efficiency improvements that included new lighting, updated heating and cooling infrastructures, automated systems, and insulation. This quintessential example of an energy efficiency retrofit leads the way for a community that just underwent an arduous rebuilding process. John Majercak asserts that “we can cost-effectively retrofit old and damaged buildings. It holds implications for the health of a robust community and gives guidance to those ready to make energy efficiency a priority.”
Tags Center for EcoTechnology cost-effective EcoBuilding Bargains Energy Efficiency NEEP Summit 2013 Oklahoma retrofitting Springfield tornado