The Utility of the Future: Shifting Regulatory Paradigm, or Demise of the Grid?

Massive grid defection could happen in the near future. A speaker at New England Electricity’s 141st Restructuring Roundtable, “The Electric Utility of the (Near?) Future; and The Promise of Storage for Renewables,” presented on the economic benefits of going off the grid, sending ripples through the packed audience that lined the walls and filled the overflowing room. 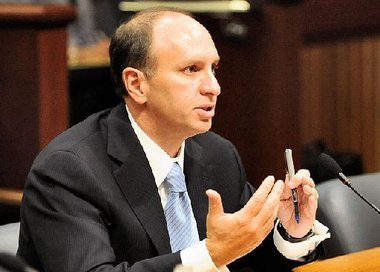 Tom King, Executive Director, U.S., of National GridClearly, this was a big deal. As a Public Policy Intern at NEEP, a meeting in Boston with the who’s who of the New England energy scene discussing major changes is the height of excitement. The June 27th Roundtable was moderated by Dr. Jonathan Raab of Raab Associates Ltd., and hosted a star-studded panel of energy leaders, whose presentations are available online. The way we interact with the energy grid is evolving; the regulatory changes state governments make to create a modern Utility of the Future are crucial, as this is an issue that affects everyone on a daily basis. Jon Creyts, a Managing Director at the Rocky Mountain Institute, began the morning by jumping into this highly contentious issue with his presentation entitled “The Economics of Grid Defection.” The goal of Creyts’s study was to establish a fact-base for where and when solar power coupled with battery storage hybrid power systems can compete with traditional utility service. The results of his study were startling: with combined improvement (CI) (incorporating accelerated technology improvement and demand-side improvement like efficiency), 90% of northeast commercial markets will have favorable economics by 2024 to defect from the grid. Creyts was not, however, advocating for defection, calling it suboptimal and clearly stating that the continued use of the grid is crucial for equity, avoiding stranded capital, and security. The words “compete” and “defect” are loaded with connotations before even digging into what they mean for the utilities. Accordingly, Creyts’s presentation elicited a big response from the audience. At the mention of a large scale grid defection there were laughs around the room from people who, in either surprise or disagreement, raised their voices in protest. A City of Boston employee actually asked Creyts if he was just being provocative with his presentation, questioning why anyone would want to defect from the grid. There were murmurs of accent around the room. Creyts answered that there are many motivating factors to go off the grid including issues of economics, resiliency, greenness, and increased consumer control. At a panel about the future of utilities, at least one person, probably more, could not even comprehend the desire to go off the grid! The next presentation was also about the promise of storage for renewables — Paul Hibbard, a Vice President at Analysis Group presented on “Project Vigilance: Functional Feasibility Study for the Installation of Ambri Energy Storage Batteries at Joint Base Cape Cod,” which concluded that in certain circumstances there is meaningful potential for grid defection. Hibbard mentioned that since grid-scale storage is half the price of individual storage, it could be a good solution for maintaining the grid while providing more clean and reliable energy. Although the notion of the “Utility of the Future” is still murky, it seems clear that grid defection is going to play a lead role, introducing new issues of energy reliability and equitability. A hybrid model of two-way energy exchange that makes grid defection unappealing and simultaneously encourages energy efficiency, renewable energy development, and energy storage will be the next, or current, project for energy legislators. The complicated relationship between the utilities and state government will continue to evolve, but, as Creyts said, technology is moving faster than regulatory cycles. What effects will this have? Who will get left behind? That whirlwind of information with enormous implications was just the first half of the panel. It was the second half that had originally piqued my interest — how the idea of the Utility of the Future is actually being carried out by states and utilities. Four panelists, sitting shoulder to shoulder at the front of the room, had yet to speak: Audrey Zibelman, Chair of the New York Public Service Commission (PSC), Ann Berwick, Chair of the Massachusetts Department of Public Utilities (DPU), Tom King, Executive Director, US, of National Grid, and David McHale, Chief Administrative Officer and Executive Vice President of Northeast Utilities. Chair Zibelman discussed New York’s current proposal, Reforming the Energy Vision (REV): an effort to transform the utilities into Distributed System Platform Providers (DSPPs) in order to create a sustainable, animated, innovative, consumer-centric market. Within the first three minutes of her presentation she mentioned energy efficiency, and the desire to promote it on both the consumer and distributer level. Like Creyts, Zibelman said that regulations and business models, not technology, are the barriers to modernizing the electric utility. Her vision of the Utility of the Future has energy efficiency playing a key role, driven by the pull of consumers. She sees energy planning becoming more of a community-based activity, designed around the choices of the consumers. Massachusetts is in the midst of changing its energy legislation as well, with Chair Berwick leading the charge. She spoke on the grid modernization efforts presently underway, which aim for opt-out advanced metering functionality within five years. She made the case for time-varying rates, now a proposal, pointing out that (1) electricity cannot readily be stored, (2) despite customers paying for full capacity, it was not used 90% of the time in New England in 2013, and (3) cross-subsidization favors customers who use more electricity at peak times. Chair Berwick challenged the idea of a death spiral for utilities, positing that they could actually see a growing customer base with an increasing load, especially if they pursue decarbonizing the grid. Refreshingly, she described climate change solutions like more renewables and storage as imperative to the Utility of the Future.

Tom King came to the podium armed, not with a PowerPoint, but with the strong words of an advocate for change. “The modern grid is here,” he said, “it has been here for several years!” He praised New York’s initiatives and asked Massachusetts to do more, exclaiming that the utilities, not only the political leadership, are ready to embrace change. King said that in coming years networks will be fundamentally redesigned, facilitated by the evolving and innovating utilities. King was animated as he told the audience that energy efficiency is the number one most economic investment. He described developing our energy efficiency as critical. King made it clear that state regulatory frameworks must change to help make new technology available. In his vision of the Utility of the Future, consumers use tools like the smart phone as a platform, and the market is driven by innovation. When King said that Massachusetts does not have a comprehensive approach, lacks long term vision, and needs a forward-looking comprehensive view of utility, Chair Berwick was ready with a response. She picked up her microphone and faced King, who was sitting directly on her right, to say that they did not opt for a less comprehensive approach, but rather are seeking a balance between sustainable rates and grid modernization. The utilities pushing the government for more extreme regulatory change is not what I expected to see, it was a nice surprise. Finally David McHale took the stand, discussing the engineering challenges of moving to micro grids, and calling for regulation of the future to enable the Utility of the Future. He said that although energy efficiency is shrinking the market, it is good for the customers. In McHale’s mind, the Utility of the Future is accompanied by an entirely new digital strategy to enhance communication between consumers and their energy providers. Almost every speaker pointed to regulatory change as the key to the Utility of the Future, moving towards regulations that encourage energy efficiency and a two-way modern grid that supports on-site renewable generation and storage. There was a lot happening at this meeting: bold new research, innovative technologies, audience participation, and industry leaders disagreeing and collaborating to lay out plans for their understanding of the Utility of the Future.