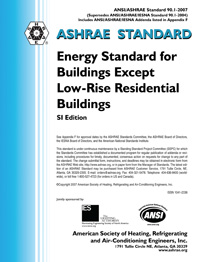 — In the world of advanced building energy codes, it’s a major disappointment. ASHRAE 90.2 is a Residential Energy Standard published by the American Society of Heating, Refrigerating and Air Conditioning Engineers (ASHRAE) that provides guidance for meeting minimum energy efficiency requirements in low-rise residential buildings (single family to multi-family). And in its current draft, 90.2 is under ASHRAE committee review. In 2006, ASHRAE committed to developing building standards, beginning with its 2010 series, which would reflect national energy policy and improve the energy performance of all new buildings by at least 30 percent over the 2006 International Energy Conservation Code (IECC). The present ASHRAE 90.2 draft falls far short of this 30 percent goal and any jurisdiction that adopts the current draft edition of Standard 90.2 as its residential energy code in the mistaken belief that it provides the same level of energy performance as ASHRAE 90.1-2010: Energy Standard for Buildings except Low-Rise Residential Buildings will be unpleasantly surprised. Analysis by the Energy Efficiency Codes Coalition of ASHRAE 90.2 as currently written shows an energy improvement over the 2006 IECC of only between 16 and 25.3 percent. It’s also worth mentioning that the requirements in the ASHRAE 90.2 draft were already rejected at the IECC 2010 Final Action Hearings in Charlotte, North Carolina, when the same proposal failed to achieve the support of the International Code Council (ICC) multi-jurisdictional voting representatives. There are several reasons for critical review of ASHRAE Standard 90.2 by states and local governments. Let’s explore these issues and their impacts. ISSUE: ASHRAE 90.2 proposes 28 separate prescriptive (build it this way) paths across the seven climate zones in the continental United States. Add three exceptions each within three zones, and that amounts to a total of 37 different pathways. IMPACT: Compare 37 choices to the IECC’s single prescriptive path per zone and you can understand the cause for concern. Determining compliance for a single code is difficult enough, having to consider 37 different pathways complicates the issue of code compliance exponentially. ISSUE: ASHRAE 90.2 increases workloads for compliance enforcement without requiring comprehensive documentation of glazing ratios (windows). IMPACT: ASHRAE 90.2 requires additional computational checking to determine if the pathway chosen complies with new maximum allowed window and skylight area requirements. As of 2004, in an effort to simplify the code and make code compliance work more manageable, the IECC no longer requires that maximum glass area be checked for an area ratio. This added workload was also previously rejected at the IECC 2010 Final Action Hearings. ISSUE: ASHRAE 90.2 fails to recognize emerging minimum baselines. ASHRAE 90.2 requires various equipment efficiencies in its prescriptive paths to meet current National Appliance Energy Conservation Act (NAECA) standards. NAECA standards are currently being finalized (well known to the ASHRAE committee tasked with updating Standard 90.2) to reflect improved minimum efficiency standards for heating, ventilating and air conditioning (HVAC) equipment. IMPACT: Use of expiring NAECA standards for HVAC equipment, when new and improved standards are in the process of being finalized, is counterproductive and substantially weakens the potential for energy savings associated with operating enhanced energy-efficient equipment. ASHRAE 90.2 is an incomplete standard; it lacks coordination with its sister 90.1 Standard and creates confusion by including references to standards no longer approved for use. It is unnecessarily complicated in some places, and in other places lacks needed explanation of specific terms used and where they apply in the code. This makes ASHRAE 90.2, as a building standard, not only difficult to understand but also to comply with and enforce. NEEP is joining with DOE, ACEEE, MEEA and others to address the ASHRAE Committee at its June 27-28 annual meeting in Montreal to bring forward these problems and concerns and to urge that 90.2 adopt changes that will achieve ASHRAE’s 30% commitment and make ASHRAE 90.2 more enforceable, adoptable and user-friendly. Please let us know your concerns, particularly if they are beyond the scope of our issues and the comments expressed herein. Contact Don Vigneau, NEEP Project Manager, Building Energy Codes, at dvigneau@neep.org.
Tags 90.1 90.2 ASHRAE Building Energy Codes Buildings Energy Standard Final Action Hearings ICC IECC