A Call for Compliance: Energy Efficiency’s Role in the Clean Power Plan

With the EPA’s announcement of final rules under 111(d), we turn the page toward a cleaner, healthier, economically vibrant power sector.  At NEEP, we’re fortunate to operate within a region which has time and time again proven that energy efficiency can be the cornerstone to a more resilient, clean, reliable and affordable energy system.

The Negawatt as a Foundational Component of the Clean Power Plan

Furthermore, the EPA has explicitly designed a component of the Clean Power Plan that emphasizes investment in demand-side energy efficiency in low-income communities.  Known as the Clean Energy Incentive Program, this initiative illustrates that benefits of demand side energy efficiency investment aren’t limited to carbon emission reductions and or benefits associated with kWh savings. Demand side energy efficiency measures — such as those offered in the low income sector — also provide broad benefits such as more affordable energy bills that reduce bill payment arrearages, health and safety improvements that reduce medical costs, and reduced maintenance costs.

As noted by the Administration, “EPA’s analysis shows that energy efficiency is expected to play a major role in meeting the state targets as a cost-effective and widely-available carbon reduction tool, saving enough energy to power 30 million homes and putting money back in ratepayers’ pockets.”

Indeed, power companies, consumers, and businesses are recognizing that the cheapest kWh is the one that we do not use.  Leading businesses throughout the country are investing in energy efficiency, not because it’s the cleanest power source, but because it’s the least cost energy resource and a winning strategy for business success.  With finalization of the Clean Power Plan, all ratepayers are well positioned to benefit from nationwide public policy leadership on this trend as well.  For example, the EPA predicts that energy efficiency attributable to Clean Power Plan implementation will reduce the average electric bill by about $7 per month by 2030.

The Clean Power Plan in the NEEP Region 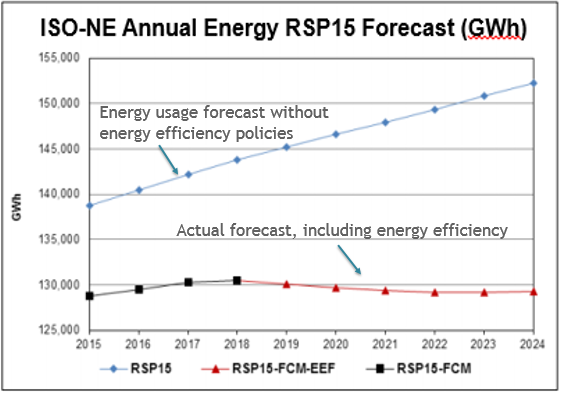 The Northeast /Mid-Atlantic region already leads the nation in innovative efficiency programs and policies, with the American Council for an Energy-Efficient Economy (ACEEE) Scorecard ranking six Northeast and Mid-Atlantic states within the country’s top ten, and classifying every jurisdiction in the region as within the top twenty five.   As a direct result of these investments in energy efficiency, system operators within the region have forecasted limited to no electric load growth in the coming years, saving ratepayers from costly investments in transmission and distribution system build outs.  This impact is demonstrated by the chart to the right.
The Clean Power Plan offers the potential for our region to harness this acquired knowledge-base and culture of innovation to lead the nation in the development — and export — of economically efficinet power sector solutions; solutions built upon a foundation of cost-effective energy efficinecy programs and practices.

Market Based Mechanisms, Achieving the Goals of the Clean Air Act

The electric power industry, air regulators, and political leadership have worked together to solve similar problems in the past. The EPA’s Acid Rain Program and the Regional Greenhouse Gas Initiative are two pertinent examples.

In 1990, Congress amended the Clean Air Act to limit SO2 and NOx emitted by our electric power industry to curb if  not reverse the harmful effects of acid rain on our rivers, lakes, and ecosystems.  The first large scale cap-and-trade  program in the world, the EPA’s Acid Rain Program was an unparalleled success, providing significant reductions in  the pollutants that cause acid rain at a significant lower cost than initially predicted.  Energy efficiency programs  throughout the region contribute to these reductions, with the states in NEEP’s Regional Energy Efficiency Database  (REED) cataloguing 2,447 tons of SO2 and 1,479 tons of NOX emission reductions in 2013 alone, as demonstrated by  the chart to the right.
Another example of a market-based mechanism successfully working to tackle large-scale pollution is the Northeast and Mid-Atlantic’s Regional Greenhouse Gas Initiative (RGGI). Nine jurisdictions within the NEEP region participate in the RGGI program, which places a mass-based cap on power plant emissions, utilizing tradable emission allowances as an efficient market-based mechanism to incent compliance.  Since its inception, RGGI has become a proven economic engine within the region, producing $1.3 billion in economic benefits and 14,000 job-years between 2012 and 2014 alone.

Many states participating in the RGGI program direct their auction proceeds toward energy efficiency programs, which are widely accepted as the most cost-effective means of lowering carbon emissions. Continued investment of RGGI carbon allowance auction proceeds into more energy efficiency is a prudent path for regulators to encourage as Clean Power Plan implementation moves ahead.

States already enrolled in RGGI will likely continue on a path toward compliance via that mechanism, perhaps with slight revisions around commitment duration, emission caps, and the cost containment reserve mechanisms.  Additional states within the region have also signaled an interest in RGGI or a similar mechanism as a Clean Power Plan compliance strategy.

Regardless of whether additional states use RGGI’s established system as a compliance mechanism to reduce power plant carbon emissions, it’s likely that energy efficiency will be a foundational compliance pathway for the Clean Power Plan, positioning the Northeast and Mid-Atlantic region to share their innovative efficiency programs and policies with the rest of the country and beyond.  Indeed, our region’s success is a timely and inspiring example for nations gathering in Paris this fall for the 2015 International Conference of Parties to achieve a legally binding and universal agreement on climate to keep global warming below 2°C.