A Changing Landscape: Characterizing Energy Efficiency as a Resource, Not a Cost

NEEP’s 2015 Regional Roundup confirms that we’re seeing a changing landscape in the world of energy efficiency. Make no mistake about it—the ground is shifting nationally and the Northeast-Mid-Atlantic region is not invulnerable to these shifts in energy efficiency focus and practice.

On one hand, the region is home to a remarkable number of states that are very much leaders in the field of energy efficiency program implementation. Massachusetts, Vermont, and Rhode Island continue to jockey for leadership positions in the nation, while six of 11 states within the region finished within the top 10 positions on the most recent ACEEE scorecard.

On the other hand, the region is facing continued calls for expanded build-out of centralized gas infrastructure and changing political leadership at the state level that has indicated a shift in focus and potentially may threaten the region’s position as the clear leader in efficiency program planning and implementation. Within this context, the discussion below expands upon the recent Massachusetts draft efficiency program plan. While there is no doubt the Commonwealth will remain a leader on energy efficiency, the pending plans signal a possible shift in developments in the energy efficiency that is worth examining.

Aggressive Policies in New England are leading the Nation 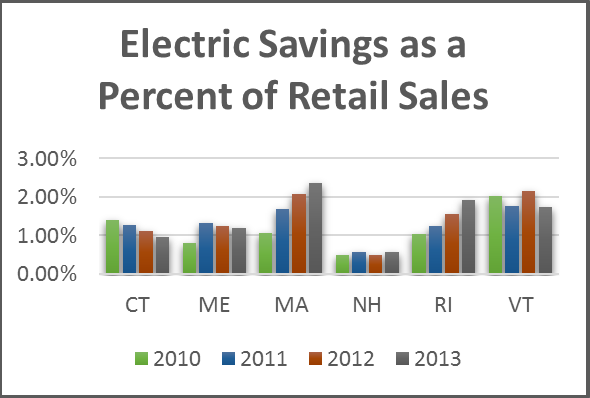 The chart to the right shows the region’s electric savings attributable to energy efficiency programs as a percentage of retail sales. The data here has been drawn from NEEP's Regional Energy Efficiency Database (REED), which serves as a dashboard for the consistent reporting of electric and natural gas energy efficiency program energy and demand savings and associated costs, avoided emissions, and job impacts across the Northeast and Mid-Atlantic region. REED data is freely available on the web and NEEP strongly encourages its use by all interested parties.

While the data here is limited to what has been reported for the 2013 program year, the chart illustrates that efficiency program savings have been on the upswing in recent years. As program administrators experiment with more designs for delivering programs, and regulators become more comfortable with energy efficiency as the least-cost energy resource, we have seen programs progress toward savings that surpass two percent of retail sales and beyond.

A National Leader, Questioning its Convictions

However, it’s important not to take for granted the fact that programs within the region will continue to deliver all cost-effective energy efficiency measures.

For example, a recently published draft of Massachusetts’ Joint Statewide Three-Year Electric and Gas Energy Efficiency Plan has proposed a decline in goals which until today had been on the upswing. The graph below shows projected savings that move from roughly 2.6 percent of retail electric sales as projected for 2015 in the last three-year plan, to approximately 2.5 percent of retail sales in the most recent proposal. These numbers bring Massachusetts’ savings goals down to levels below what the state had been reaching for in 2013, and may leave millions of dollars’ worth of available ratepayer benefits on the table. 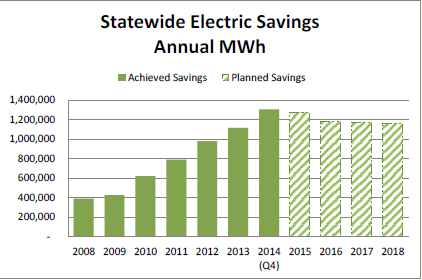 This proposed 2.5 percent goal contrasts with the recommendations of the Massachusetts Energy Efficiency Advisory Council, which place economically viable savings at an average of approximately 3.04 percent of retail electric sales throughout the three-year plan. The goal also contrasts with targets set by program administrators in Rhode Island, which will continue to escalate through 2017 to 2.6 percent of retail electric sales.  Whether this will impact Massachusetts’ standing as the leading state in ACEEE’s annual scorecard remains unclear.

Recent public statements about costs associated with energy efficiency, as well as language within the draft plan itself stating that programs must “[R]emain ever-conscious of the trust invested in PA programs to deliver solid efficiency investments without creating undue bill impacts” hint that the downward trend in program savings as percent of electric load may be part of a new focus on reducing costs. Almost as telling is the draft plan’s statement that “precedent” requires three-year energy efficiency plans “provide for the acquisition of all cost-effective energy efficiency resources in a manner that is sustainable and in consideration of short term customer bill impacts.”

Efficiency as the Most Cost-Effective Supply Resource, not a Cost to be Borne

While it may be true that efficiency program administrators must remain aware of bill impacts, emphasizing short-term bill impacts and characterizing investments in energy efficiency as costs to ratepayers is concerning for a number of reasons.

First, energy efficiency is now widely accepted by economists as the least cost energy resource that a utility can deliver their ratepayers.

Second, portfolios in Massachusetts, as in much of the region, are required to undergo cost-effectiveness screening before they may be administered. This screening requirement is derived from the legislative directive under G.L. c. 25, § 21 (b)(1) that “[E]lectric and natural gas resource needs shall first be met through all available energy efficiency and demand reduction resources that are cost effective or less expensive than supply.” Massachusetts utilizes the Total Resource Cost (TRC) test to determine whether a portfolio of measures is cost effective. The results of the draft program plan’s TRC test are highlighted below.

Under the draft program plan, the TRC test demonstrates that for every $1 invested in energy efficiency, $2.38 are returned to ratepayers. Since energy efficiency measures suggested by this very plan provide a return on investment of more than 2:1, it would be inaccurate to characterize increases in program spending as a cost, rather than a resource. For example, a recent report by the Acadia Center indicates that, if not for investments in energy efficiency in the period since 2000, wholesale electricity prices would have been 24 percent higher during the Winter of 2014.

If energy efficiency has been proven to reduce consumer costs, defer expensive transmission and distribution investments, contribute greatly to reducing greenhouse gas emissions, and do so at a fraction of the cost of other energy resources – be they newer, renewable resources or traditional fossil fuel resources – it comes as a surprise that some still refuse to look at energy efficiency as anything other than a program “cost.” The sooner we all acknowledge the true nature of the efficiency “resource,” the sooner all customers will be able to more fully realize the true range of its benefits.