Congratulations, Massachusetts! (And NY, VT, CT, RI and MD, while we’re at it!) 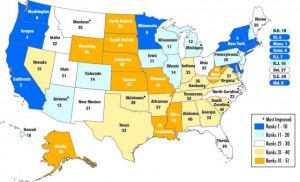 The much anticipated state energy efficiency policy scorecard was just issued by the American Council for an Energy Efficient Economy (ACEEE), and, once again, Massachusetts has topped the list as the number one state in the nation for energy efficiency public policies. (See: http://www.aceee.org/sector/state-policy/) Congratulations first and foremost to Gov. Deval Patrick, whose leadership in not just seeing, but realizing, energy efficiency as the state’s first-order energy resource has made all the difference in separating Massachusetts from the pack. For the second year in a row, the Bay State topped California, which again finished second after having occupied the top spot for the entire history of ACEEE’s scorecard. And congratulations also to Secretary Rick Sullivan of the Executive Office of Energy and Environmental Affairs, and Bobbi Kates-Garnick, Undersecretary for Energy (and former NEEP Board member) and all of the staff at EOEEA and the Department of Energy Resources for their commitments to maintaining Massachusetts’ position as a national leader. Of particular note, Massachusetts earned 19.5 out of a possible 20 points in the category of “Utility and Public Benefit Programs and Policies” due to its high successful programs implemented under the Green Communities Act of 2008. But the Bay State wasn’t alone in being recognized for energy efficiency policy leadership. Of the top 10 states in the ACEEE 2012 Scorecard, six are in the Northeast region, which is obviously very gratifying to see for us here at NEEP. New York, (#3), Vermont (#5), Connecticut (#6), Rhode Island (#7), and Maryland (#9) all were ranked highly in their policy commitments to energy efficiency. Of note, Connecticut rose two spots in this year’s Scorecard, and Gov. Dannel Malloy and Department of Energy and Environmental Protection Commissioner Dan Esty have made no secret of their desire to wrest the top spot in the rankings away from their neighbors to the north. It’s great to see Connecticut being rewarded for being one of only two states (California being the other) that have adopted new state-based appliance efficiency standards in the past two years. As new product standards become possible, we certainly hope other states will follow Connecticut’s example and take energy management into their own hands. (Massachusetts, for example, received 0 out of 2 possible points for appliance standards policy.) And Maryland should be commended as well. As one of the new states in enacting ratepayer funded efficiency programs, Maryland has certainly had its troubles getting out of the gate, falling short in its savings goals in their programs’ early years. But the state has committed to energy efficiency, and is working hard to address issues with its efficiency programs. Meanwhile, it’s one of only two states to have adopted the 2012 International Energy Conservation Code (IECC) as its statewide energy code. Way to go, Maryland! Not all of the news is positive from our region. Maine, disappointingly but not surprisingly, fell the furthest, going from 12th in the 2011 Scorecard to 25th in 2012. This is due largely to a governor and legislature that do not prioritize energy efficiency.  And, despite a legislative mandate to capture all cost effective energy efficiency, the fatal flaw in the state’s policy continues to be that funding for the Efficiency Maine Trust’s programs is left to the discretion of the legislature, which has capped the efficiency program budgets at a level far below that which would enable the state to capture all cost effective efficiency on behalf of its residents and businesses. In addition, the state was dunned for retreating from its first mandatory statewide building energy code, making it a local option effectively for two-thirds of the state. Surprisingly, New Jersey only dropped one spot in the rankings, despite the fact that Gov. Chris Christie,  has again duped taxpayers and ratepayers in that state by raiding hundreds of millions of dollars from the Clean Energy Fund to go toward the general state budget. This practice will, presumably, catch up to New Jersey in future Scorecards. But, in focusing on the positive, let’s raise a glass to those states in our region that continue to understand that the cheapest kilowatt hour is the one we don’t use; that environmental sustainability is more than just a personal virtue, but a policy imperative; that economic development and a clean energy future go hand-in-hand; and that energy efficiency is, indeed, our first order energy resource.