The region’s regulatory landscape has been abuzz with energy efficiency developments during summer 2015, and below we describe recent state proceedings of import:

Grid Modernization proceedings or proposals are underway in three distinct jurisdictions — four counting New York — within the region.  Massachusetts is furthest along, with Grid Modernization plans due to be filed by the state’s utilities on August 19.  The two other jurisdictions in the region that have now opened scoping proceedings are the District of Columbia and New Hampshire, with initial comments due on August 31 in the District of Columbia and September 17 in New Hampshire.

New York.  What isn’t happening in New York right now?  Since there is quite a bit to keep track of, you can CLICK HERE for a one page directory of REV-relevant resources, plans, whitepapers, and orders related to energy efficiency.  Aside from broader issues surrounding performance-based ratemaking and distributed system implementation plans, perhaps the most relevant resources related to energy efficiency include:

Maryland’s Public Service Commission issued an Order addressing cost effectiveness testing and target-setting over the next 5 years.  Ultimately, regulators settled on a savings target at 2 percent of retail electric sales by 2020, increasing the current portfolios by approximately .2 percent of retail electric sales annually.  The order also embraced societal cost test a means of screening energy efficiency measures, which will consider a number of non-energy benefits like avoided air emissions and occupant comfort.  The NRDC’s Deron Lovaas released an excellent blog summarizing the Order.  It’s also worth noting that this series of victories came on the heels of a utility merger which also resulted in funding for energy efficiency.

As legislatures throughout the region head toward their summer breaks, several pieces of legislation are worth noting:

Vermont’s legislature enacted Act 56 this summer, which is best known for tightening standards around the in-state retirement of renewable energy credits, but perhaps more notably established energy transformation portfolio requirements for the state’s utilities.  The portfolios requirements, which begin in 2017 at two percent of retail sales and rise to twelve percent of retail sales by 2032, encourage projects that reduce fossil fuel consumption through fuel switching, transportation efficiency, and weatherization.

New Hampshire’s legislature finished up their session by enacting two important bills. The first is a bill directing the Public Utility Commission to open a grid modernization proceeding, as mentioned above. The second bill authorized bond issuances to finalize Eversource NH’s divestment of its generation assets, a move which finalized an agreement committing $5 million toward establishment of a clean energy fund.

Maine’s legislature offered a unique display of unyielding bipartisanship earlier this summer when they voted unanimously to fix a missing “and” in the enabling language that would have halved Efficiency Maine’s program funding, over-riding a veto threat by the Governor and directing the Public Utility Commission to fund the program fully.

For more information on bills of note in legislatures around the region, please visit NEEP’s web-based legislative tracker.

New York recently released their ambitious 2015 State Energy Plan, helping to outline the broad goals associated with their Reforming the Energy Vision proceeding.  Notable features of the plan relating to energy efficiency include an emphasis on battery storage industries, the transportation sector, and community engagement/support.  Overall, the Cuomo Administration is seeking to reduce greenhouse gas emissions by 40% from 1990 levels, produce 50% of electric generation from renewable resources, and affect a 600 trillion BTU increase in energy efficiency by the 2030.

Vermont recently began the process of updating their 2011 Comprehensive Energy Plan for 2015. Holding several public input sessions throughout the state and soliciting comment via the web, a draft plan is expected to be completed in the next several months and features and will likely feature an emphasis on fuel switching to comply with the goals of the recently passed energy transformation legislation.

New Jersey is in the midst of revising their energy master plan, which was lasted updated in 2011.  Several hearings are being held around the state and written public comments can be submitted by August 24, 2015.  The plan will consider emerging issues such as the Energy Resilience Bank, emergency preparedness, microgrids and distributed energy resources.

The August 3 release of the Environmental Protection Agency (EPA)’s Clean Power Plan will probably be our industry’s most salient news story this summer, bringing the environmental detriments associated with energy generation into the limelight for a broad audience. Below we’ll briefly discuss those detriments, contrasted against some of the quantifiable benefits resulting from the EPA’s Clean Power Plan.

Opponents of the Plan may paint it as a war on coal, but the truth is coal already lost this war. Due to the advent of hydraulic fracturing, new coal plants are now uneconomic in most of the country.  However, remaining coal units continue to release bio accumulating heavy metals and other toxic substances into our biosphere, causing great detriment to the environmental health of our planet and persons.  The Clean Power Plan will help limit that detriment.

Pushing past coal, we recently entered an energy age defined by high efficiency combined-cycle natural gas (ccNG) turbines and an abundant supply of hydraulically fractured shale gas.  The EPA’s June Draft Assessment of Potential Impacts of Hydraulic Fracturing for Oil and Gas on Drinking Water Resources may have found an absence of widespread impacts on drinking water — or as some argue, an absence of evidence — but major concerns remain around upstream methane leakage, water intensity, and infrastructure investments associated with the shale gas boom.  Since ccNG turbines release fewer point source emissions than coal, the Clean Power Plan will promote investment in such resources.

Whether its coal, shale gas, or other major forms of combustion-based electric generation, the fundamental logic behind the Clean Power Plan is that the electric power industry must begin accounting for the detriments caused by these resources; detriments which are currently externalized into the air we breathe.  Limiting those detriments will correct previous market failures and provide net economic, public health, and environmental health benefits across the country.

The EPA has done an excellent job of quantifying net benefits provided by the plan, which are cited in the table below: 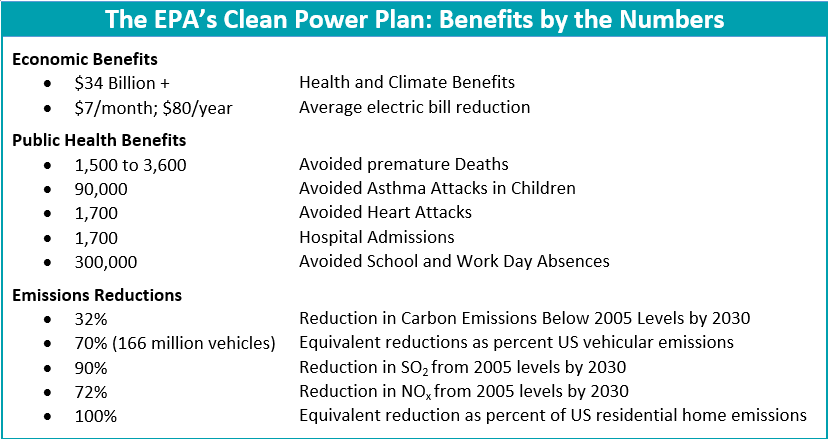 Within the context of the Clean Power Plan’s recent rule finalization, two resources are worth noting in our Data Moment segment:

First, the Analysis Group issued a Report in July on the economic impacts of the Regional Greenhouse Gas Initiative that described RGGI as producing $1.3 billion in economic benefits and 14,000 job-years between 2012 and 2014 alone. The chart below described the total economic impact within the RGGI region. 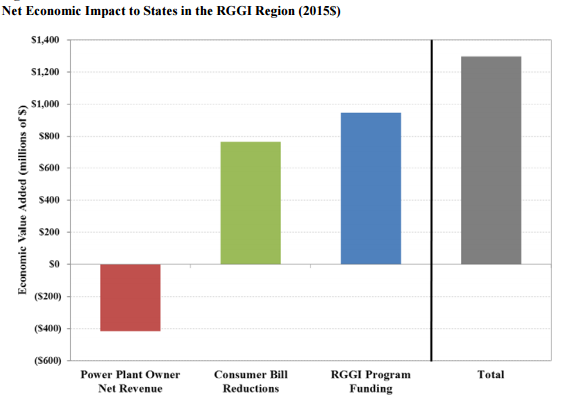 Second, the Acadia center recently issued a Report on the Regional Greenhouse Gas Initiative’s potential as a model for the power sector on a national level.  The report details emission reductions, electric price reductions, and other power sector trends taking place during RGGI’s implementation.  Emission reductions are displayed in the chart below. 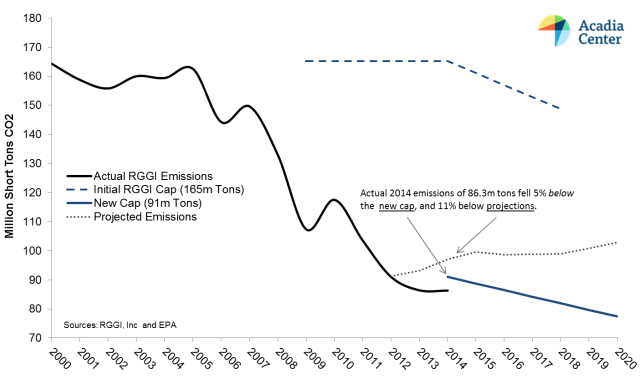 Perhaps more notably, the report also describes programmatic alterations that may be necessary to facilitate integration with the EPA’s Clean Power Plan, including slight revisions around commitment duration, emission caps, and the cost containment reserve mechanism.