Here’s our brief rundown on key developments in energy efficiency policy from around the Northeast and Mid-Atlantic states NEEP is keeping tabs on. Data Moment: Electricity Use Decoupling from Economic Growth, BP Finds 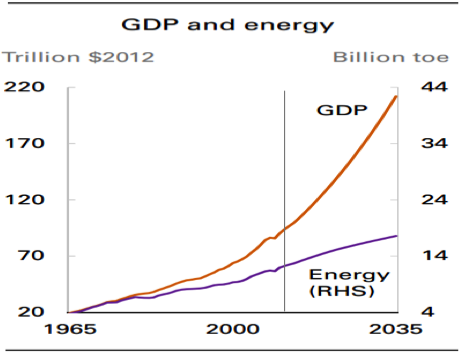 Source: BP, Annual Energy Outlook for 2035, p. 16
Last month, Brad Plumer of the Washington Post reported that BP found in its Annual Energy Outlook for 2035 that energy consumption is gradually decoupling from economic growth. The graph below is yet more evidence that we are making significantly progress, through policy and through markets, to become more energy efficient. New England Governors’ Statement on Energy Infrastructure The New England Governors released a statement in December calling for the states to work together on a regional energy infrastructure investment initiative that “diversifies our energy supply portfolio while ensuring that the benefits and costs of transmission and pipeline investments are shared appropriately among the New England states.” While the governor’s statement was widely seen as expressing their intent to expand gas pipeline capacity and create new electric transmission to bring hydropower from Canada into the region (for which the New England States Committee on Electricity (NESCOE) has petitioned ISO-New England’s assistance), they also re-iterated their support for energy efficiency as a key resource to be included in load forecasting and transmission planning. The recent electricity price spikes in our region demonstrate the importance of our natural gas energy efficiency programs to ensuring reasonably-priced electricity. ISO-New England & Energy Efficiency 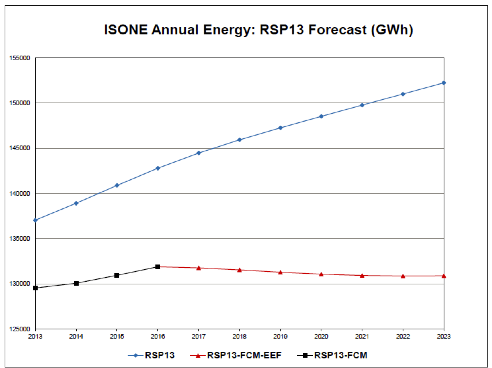 Source: ISO-New England, 2013 Regional System Plan
Oil Heat Energy Efficiency The U.S. Congress recently passed the Farm Bill, and along with it, it re-authorized the Oilheat Efficiency, Renewable Fuel and Jobs Training Act, informally known as the National Oilheat Research Alliance (NORA). NORA allows oilheat retailers to pay a small assessment on heating oil sales in twenty-three states to support programs that benefit oilheat customers. Fifteen (15) percent of these funds will go towards energy efficiency measures and oilheat system replacements, which will allow some oilheat dealers to provide energy efficiency services to their customers. While the impact of such federal action will be impactful, NEEP continues to work with our allies in supporting state oilheat efficiency legislation, such as H. 2741 in Massachusetts that would allow for much greater investments in energy efficiency resources for homes and businesses that rely on oilheat. State Energy Efficiency Proceedings The PSC is also exploring new energy and environmental goals for its EEPS programs for the years beyond the 2015, when the current set of programs is set to end. New York is widely seen as having an excellent policy, but has not been able to reach its aggressive energy efficiency goals. Advocates hope that this order can be the first step in re-vamping their energy efficiency programs (NEEP’s comments on the EEPS Restructuring proposal can be seen here). State Legislatures & Energy Efficiency Bills State legislatures around the region have begun their 2014 legislative sessions. While most will have short sessions because of upcoming mid-term elections, there are still important energy efficiency measures on the table. We are paying particularly close attention to Delaware, where a major energy efficiency title, HB 179, is under consideration, as well as New Hampshire, which continues to discuss how to expand its investments in energy efficiency. And as it’s early in the year, much more is surely on its way. For a list of energy efficiency legislation NEEP is tracking, click here.
Tags DecouplingEmpower MarylandEnergy EfficiencyFarm Billforward capacity marketISO New Englandoil heat energy efficiencypeak demandpolicy tracker