It was a typical gray and cold Western Mass winter morning, but November 20, 2018 was no ordinary day. Great anticipation filled the streets of Northampton as the first recreational cannabis dispensary opened its doors for sales. A line of thousands of people stood for hours to purchase locally-grown cannabis. My mom texted from Florida at 7:00 a.m., “your mayor is on the news, he’s first in line”.

Over $2.5 million was spent in the first two days at the first two dispensaries, located in Leicester and Northampton, to offer “adult” cannabis. This news was a national headline. Opening day was long awaited and celebrated by many. For energy efficiency advocates seeing through the haze, however, opening day was one of both concern and potential.

The Massachusetts Global Warming Solutions Act passed in 2008 requires the state to reduce Greenhouse Gas (GHG) emissions between 10 and 50 percent below 1990 GHG emissions levels by 2020 and 80 percent by 2050. Massachusetts must reduce carbon emissions through energy efficiency, retrofitting existing buildings, decarbonization of electric generation, and implementation of renewable power generation to potentially avoid the worse consequences of climate change.

Unfortunately, the cultivation of indoor grown cannabis  is one of the most energy-intensive industrial processes, with the exception of outdoor and greenhouse grown. Growing the crop requires 24/7 lighting, heating, ventilation, humidity control, and air conditioning. One pound of cannabis contributes in the range of 3000 to 5000 pounds of carbon dioxide. That much carbon is equivalent to driving non-stop for 196 hours or taking three to four trips across the United States.

According to Lawrence Berkeley National Laboratories, one percent of the nation’s electricity is used in the cultivation of marijuana. That’s equivalent to 1.7 million homes, 15 million tons of GHG, or the same as what three million average gasoline-fueled cars emit in one year.

Down in the Weeds

According to the MA State Health Department, the first year of medical sales amounted to 20,000 pounds of cannabis sold. The state estimates that recreational pot sales will range from 290,000 to 545,000 pounds per year. 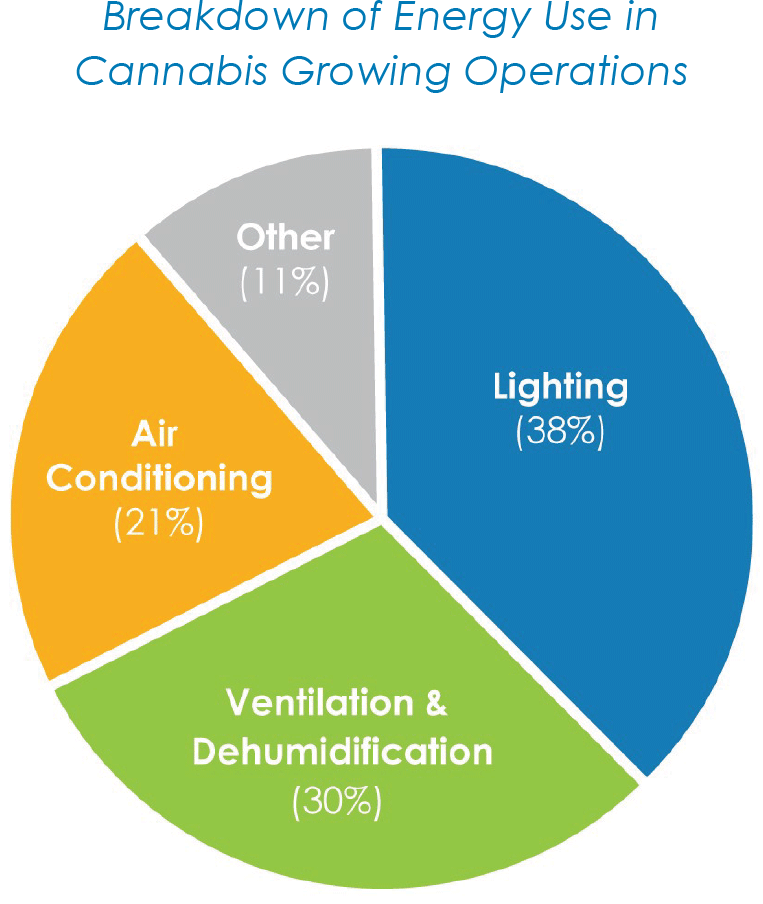 I would be remiss if I didn’t mention a less often discussed resource used in the cultivation of cannabis: water. Water consumption is six to 15 gallons a day per plant depending on the plant type. Some estimates say four million gallons per 100,000 sq. ft. is required. Certainly, regulation and conservation is needed to address water and cannabis production. The energy numbers quoted throughout this blog don’t account for water use.

Massachusetts is among the most energy-efficient states in the country and hopes to continue that trend into the future. As such, the Massachusetts Cannabis Commission created the Massachusetts Cannabis Energy & Environment working group. The Commission currently requires energy efficiency provisions for growing facilities that primarily address lighting power density and building envelope. The working group and the Commission are currently reviewing potential new energy rules that will address the full emissions impact of the cannabis growing industry.

Nothing less than a 100 percent GHG neutral cannabis production industry is acceptable for MA. The solution must come primarily from efficiency, particularly lighting efficiency.

Carbon trading and carbon tax markets should be established for the state and perhaps among all legal marijuana states.

Utilities and public administrators have a role in ensuring that the growing industry doesn’t tip the scales towards irrevocable emissions growth. All Massachusetts utilities* should offer incentives for equipment (controls, heat pumps, ductless air conditioning, meters) to benefit the industry and, in turn, all citizens of the state. Aggressive marketing and outreach programs should be designed to reach growers that aren’t participating in efficiency programs.

Increased incentives and programs for renewables, heat pumps, and battery storage in the residential and commercial utility sectors can be used to offset cannabis industry power usage and GHG emissions.

On the national level, the International Code Council should consider national codes for energy-intensive indoor agriculture.

Straddling the space between concern and potential, Massachusetts has an opportunity to set a national precedent in the management of energy and water for cannabis cultivation and other indoor agriculture. It is an absolute imperative to do so in order to remain first in the nation for energy efficiency and to further move the state to zero energy and GHG emissions.

* Currently National Grid offers efficiency study and equipment incentives to growers. However, not all eligible grow operations are participating.