Only Natural? A Rush to Gas before Right-Sizing, Efficiency Would Cost Region

You can practically hear the hand-wringing. New England is increasingly dependent on natural gas for electricity generation, and in a long cold winter such as we’ve just experienced, heating need puts a squeeze on this energy feedstock, causing wholesale prices to skyrocket.

“But I thought all this shale gas is cheap?” you say? Well, energy intensity, environmental and public health impacts of fracking notwithstanding, natural gas prices have been relatively low in some parts of the country, but not here at the end of the pipeline, and especially not in recent years, with gas making up an increasingly large portion of New England’s energy mix — averaging near 50 percent in states like Massachusetts (see the figure below for the change in our energy mix).

At the worst times of gas price and capacity constraints, power plants were burning more coal and oil this winter, undercutting climate goals. And while ratepayers’ wallets were temporarily insulated, residential and business classes alike will be feeling the pain as utilities seek to recover costs in future years. 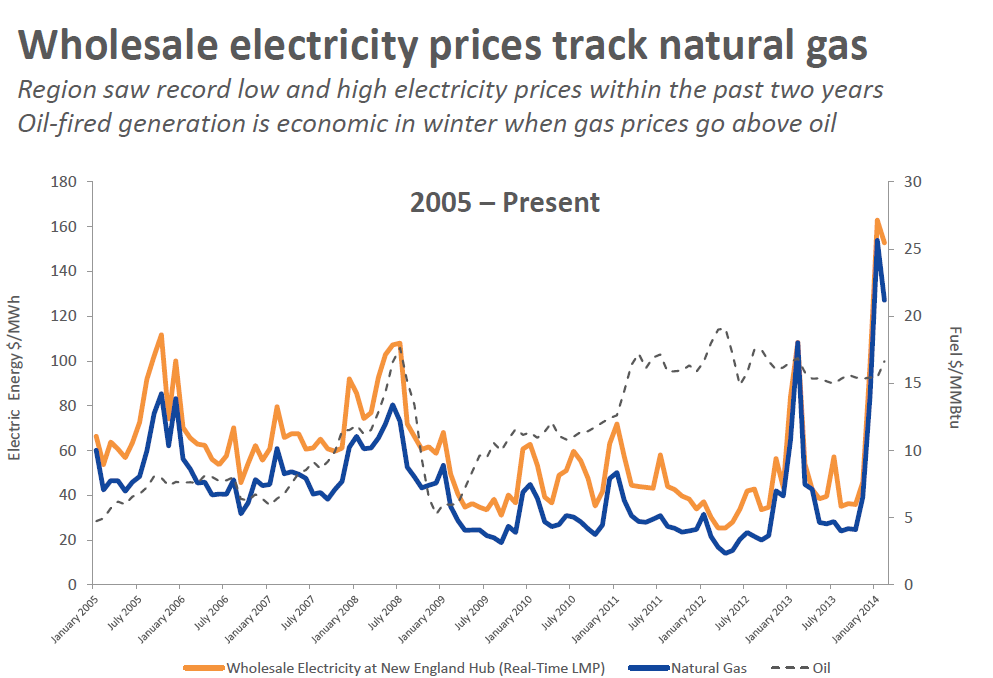 So, what’s a capacity strained region to do?  Increase diversity? Reduce peaks? Invest in energy efficiency, fix leaks and address pocket constraints? Yes. So why is it that all we are hearing about is the need for bigger pipelines, asap?

Late in 2013, the New England governors came together to release an unprecedented statement about their intent to cooperate for the region’s shared energy future. In it, the six governors wrote:

“As the region’s electric and natural gas systems have become increasingly interdependent, ensuring that we are efficiently using existing resources and securing additional clean energy supplies will be critical to New England’s economic future. To ensure a reliable, affordable and diverse energy system, we need investments in additional energy efficiency, renewable generation, natural gas pipelines, and electric transmission. These investments will also serve to balance intermittent generation, reduce peak demand, and displace some of the least efficient and most polluting fossil fuel generation, enabling the states to meet clean energy and greenhouse gas reduction goals while improving the economic competitiveness of our region.”

You’ll note that they lead with energy efficiency, a fact not lost on us at NEEP. We know the region needs more affordable, reliable, clean and diverse energy. But do we know how much, and where? Not really.

Conservative, prudent ISO-New England makes a point of forecasting electric load, and since last year they include the impacts of energy efficiency as well. Obviously, we want to have “enough” energy, but if we build too much capacity, ratepayers will be saddled with cost for year to come. In our view, efforts to promote gas infrastructure expansion should be similar to the ISO-New England planning process for electric transmission projects, with appropriate public vetting of the need for new projects, a consideration of costs and risk, and analysis of the impact of lower cost alternatives to meet our winter capacity needs, especially energy efficiency.

While we recognize the urgency of the situation, we at NEEP contend that New England should pause to figure out how much more gas capacity we will actually need, and do this in the context of examining system-wide efficiency. Any planning efforts for new natural gas pipeline capacity should account for 1) savings from potential repairs to gas infrastructure, 2) savings from energy efficiency programs for both electric and gas customers and 3) geo-targeting of energy efficiency and demand response projects in areas of greatest constraint. We believe the Black & Veatch study  commissioned by the New England States Committee on Electricity (NESCOE) to assess the “sufficiency of gas infrastructure to support electric-power generation in New England for the years 2014-2029” falls short. And, leaving aside the issue of Northern Pass, many leading voices seem to have an almost singular focus on bringing in more gas.

One of the main findings of the study was that: “In the absence of infrastructure and demand reduction/energy efficiency/non-natural gas-powered distributed generation solutions, New England will experience capacity constraints that will result in high natural gas and electric prices…” and that “[I]n a Low Demand Scenario, no long-term infrastructure solutions are necessary.”  (emphasis added)

Black and Veatch’s Low-demand scenario assumes “limited demand growth,” and that savings from energy efficiency “completely offsets load growth.” We understand that many view this scenario as unrealistic in light of the state of the energy market. Still, the potential savings from energy efficiency and fixing leaks have got to be part of the analysis and policy decision-making up front, and not after the fact. Anyone in efficiency knows it’s foolish to install a new boiler and then do insulation and air sealing in a home. You’d be oversizing, and paying too much. Without sufficient planning, states risk making the same kind of mistake on a grand scale with gas infrastructure.

Natural gas leaks are a major issue. Not only environmentally and in terms of public safety, but because we are all paying for that gas that is leaked – methane gas that is four times more potent a greenhouse gas than CO2. We believe that states should identify prioritize and fix these leaks in our antiquated delivery system. And just as utilities are permitted to recover investments and claim savings from efficiency, regulators should align interests to ensure that it makes financial sense for transmission and distribution companies to stop leaking gas.

In December 2012, Conservation Law Foundation released Into Thin Air, a groundbreaking report which documented that:

EE: An Important Piece of the Puzzle

Would pipeline expansion work with state energy and climate goals?

As the region seems to be rushing headlong to the pipeline solution, many considerations remain:

States and program administrators should ensure that we do these things: