Opportunities and Successes in Industrial Energy Efficiency and CHP 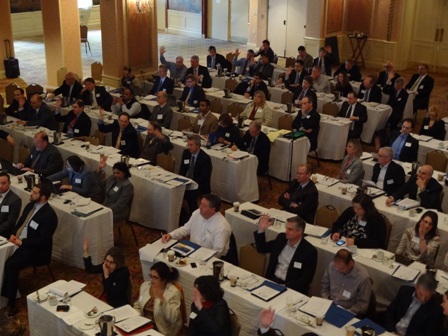 To help set the table for the U.S. DOE and NEEP co-hosted dialogue on advancing industrial energy efficiency and CHP, NEEP's Sue Coakley is moderating a discussion on 'Opportunities and Successes.' She started this dialogue by showing a video from NEEP's 2012 Energy Efficiency Summit in Stamford, Conn. that highlighted Sikorsky Aircraft and the energy efficiency and CHP investments they've made to their Stratford plant. With support from United Illuminating, Sikorsky is aiming to make their facility zero net energy with the help of an innovative co-generation unit. And with support from the Connecticut Energy Efficiency Fund, the payback period for Sikorsky's measures has been dropped to under four years. http://www.youtube.com/watch?v=mpX0xGcCB9c Showing that best practices are not limited to New England, Jim Freihaut, director of the Mid-Atlantic Clean Energy Application Center at Penn State University, highlighted Proctor and Gamble's Mehoopany, PA paper products plant, which has saved so much energy with its CHP application, that the company has closed plants in other states and moved those jobs to Pennsylvania. Since public policy is key to the realization of broader deployment of industrial efficiency and CHP, Marion Gold, Commissioner of the Rhode Island Office of Energy Resources, explained that it has been a series of policy decisions and directives that have allowed greater CHP investments to be realized in her state. It started in 2006 with Rhode Island's least-cost procurement statute, which included a report on CHP that showed that the two largest barriers were high back-up costs and payback periods deemed by users to make CHP not cost-effective enough. A new statute on decoupling in 2010 paved the way for renegotiation of utility back-up rates, to address one of those obstacles. Finally, Gov. Lincoln Chafee last year shepherded legislation that helped redefine savings calculations to include more environmental benefits, which, in turn, has allowed more incentive dollars to be made available to consumers, and thus lower payback periods. The result: Toray Plastics of North Kingstown, one of the state's largest manufacturers, has just launched a major new CHP project. Finally, to further illustrate the bottom-line economic benefits to industrial business, Bob Araujo of Sikorsky Aircraft described his companies industrial efficiency and CHP investments as not only helping Sikorsky to better control its costs - which is vital enough in an industry that deals regularly in five-year, fixed cost contracts - but in the wake of Hurricane Sandy and two devastating blizzards within months has helped "harden our infrastructure" and kept Sikorsky running during these historic weather events. Moreover, Sikorsky doubled as a resilient building for its 9,000 employees who had lost power in their homes, offering them hot showers, phone charging capabilities, medical treatment and hot meals over a multi-day period when most of the state was without power. Sikorky's efficiency and CHP efforts have been so successful that Bob has been charged with launching a new company project - which he's affectionately dubbed "Project Earth, Wind and Fire" - to emulate the company's Connecticut success at its facilities around the world.
Tags Buildings Energy Efficiency Energy Policy industrial efficiency