Solutions for the Set-Top Box Challenge?

Thanks to NRDC, a longtime partner of NEEP in helping to set new appliance efficiency standards, the challenge of energy waste from television set-top boxes-those ubiquitous devices that receive cable TV signals or digitally record TV shows-is receiving front-page news coverage. The “Better Viewing, Lower Energy Bills, and Less Pollution” report, available here, shows that the 160 million set-top boxes installed in American homes consume as much electricity as all the homes in the state of Maryland do in one year. That’s equivalent to nine 500 MW coal-fired power plants. And most of this is vampire load, consumed when the devices are not in use. 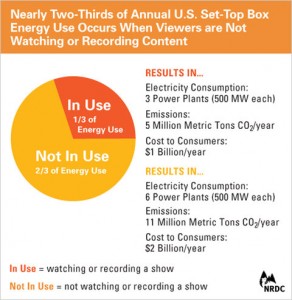 Fortunately, NRDC report finds that it would be possible to reduce set-top box energy use by 30 to 50 percent by 2020 through new technologies that would reduce the number of boxes in each home and automatically power down boxes when not in use. John Wilson of the Energy Foundation, a NEEP supporter, told The New York Times that significant improvements can be made. “Companies say it can’t be done or it’s too expensive. But in my experience, neither one is true. It can be done, and it often doesn’t cost much, if anything.” Set-top boxes do pose unique challenges. Unlike many household products, set-top boxes are owned and distributed by cable and satellite providers, so there is little incentive in the marketplace to create more energy efficient options. NEEP is actively monitoring a number of initiatives that could curb energy use from set-top boxes as part of its Appliance Standards project. These include: Recent data illustrates just how much energy consumer electronic products now consume. Set-top box energy waste provides a good opportunity to make a dent.
Tags appliance efficiency standards energy efficiency policy policy makers