State of the States: Why Appliance Standards Matter More Now Than Ever Before

In the appliance standards world, 2018 started off with a bang! Five states (three in the Northeast) pursued legislation featuring a range of new appliance efficiency standards, with several other states expressing interest and intent to follow suit.

How did it go?

Well, now that we’re in August and many legislative sessions have ended, one state has passed a new appliance efficiency standards package in 2018.

While the clock still ticks in some states and districts, we’re far enough into the process to provide some highlights, updates, and outlooks for the future.

What are standards all about?

Appliance efficiency standards have been referred to as the “best energy and climate policy you’ve never heard of”, and in many ways, it’s true. From a customer perspective, these standards are set behind the scenes and apply to only the worst performing products on the market. When achieved through federal regulation, these standards take years to establish and years more to enact. By the time they go into effect, technology has had a chance to plan and evolve; the standard is playing a critical role in removing the worst-performing products from the market so consumers are not stuck with them. When states enact standards, it’s only for products not covered federally, which can help a state step apart from the rest in efforts to curb its energy use.

Recently, the United States Department of Energy (U.S. DOE) has deprioritized federal standards. This means that states have a larger role to play in setting new standards and keeping this important efficiency strategy from losing momentum.

Confused about federal standards and what’s going to happen with lighting in 2020 with EISA? Join NEEP’s webinar on 9/14 to get your questions answered.

State level appliance standards have the potential to be major energy savers, with estimates for new state-level appliance standards to save our region over 120 billion kWh (that’s billion with a B) cumulative savings through 2035. That’s about the amount of electricity consumed each year by all the homes in ALL of New England, plus New York and Pennsylvania! In addition, there are lots of significant gas, water, and carbon savings as well (ASAP report 2017). By setting standards on products ranging from industrial air compressors to showerheads, states in the Northeast and Mid-Atlantic region – and beyond – have the opportunity to stop wasting resources on the least efficient versions of these products.

This year, we have seen these standards enjoy tremendous support from environmental groups, consumer advocates, state energy offices, and even utilities. We’ve even seen several businesses, trade associations, and manufacturers come out in support of state-level standards. This makes sense, after all, as most manufacturers make the higher efficiency products that would be untouched by new standards, anyway. New standards are win-win-win for states, consumers, the climate, and commerce. 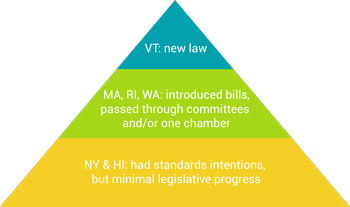 While only Vermont (so far) has signed a new standards bill into law, many other states made great progress, as noted by the pyramid image. Here at NEEP, and over with our friends at the Appliance Standards Awareness Project (ASAP), we think standards are the bee’s knees, but I will admit that it’s a pretty tricky topic for many to wrap their heads around. That’s somewhat by design. Standards happen behind the scenes for customers; for state legislators, who may not be energy experts, appliance efficiency standards are nuanced and may be hard to prioritize. With so much great attention being paid to climate issues (some of which have higher visibility and still don’t pass), appliance efficiency standards may not quite stand out in a crowd.

While Vermont may have been the only state to enact new standards thus far, Rhode Island and Massachusetts both had hearings on their standards bills, passed them out of committee, and even passed them through the house in Massachusetts. This is great progress for new standards legislation and paves a solid path for success in 2019. Furthermore, many of the bills include setting standards for new products that had never been regulated before, not even by the extensive California Energy Commission (where most state standards are set). New territory in product regulation was broached in 2018, and sometimes it takes time to get used to new things.

Looking forward, there are several states in the region and beyond where 2018 standards may still be possible, and there is increased momentum for success in 2019. Gaining further industry support will be critical for this success, but momentum is on our side. In the meantime, Vermont will be leading the nation in standards for several new products and NEEP, our partners at the Appliance Standards Awareness Project, and many others will be right there along the way to ensure these new standards are rolled out successfully. We have a lot of great work still to do!