Hallelujah. Finally, we have an American president devoting considerable attention to the topic of climate change and the energy policies that drive it. 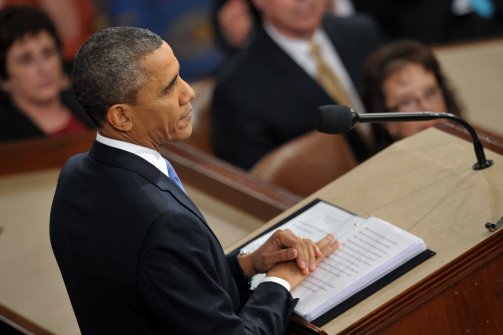 In his State of the Union address last night, President Obama made very clear that the time has come to act. For those of us engaged in ending energy waste and believing we can do more with less, his words were most welcome. The President is absolutely right in asserting that “After years of talking about it, we are finally poised to control our own energy future.”  But that sentence did more than just allow him to introduce the litany of progress that we've made; it also marked a call to end the “phony debate” on whether climate change is real. Enough. Even if you don’t believe the chorus of independent scientists who study our climate, we've seen enough drastic climatological events with our own eyes to understand that the damage we’re doing to our planet is closing in on irreparable. The pathway the President laid out to a sustainable energy future appropriately notes the role that clean, renewable energy resources will need to play. But we’re particularly heartened to hear his call for reducing energy use in our homes and buildings by 50 percent over the next 20 years. Those of us who understand the potential of energy efficiency know that is not just possible, but also a key to economic sustainability. As the President noted: “The good news is, we can make meaningful progress on this issue while driving strong economic growth.” That’s more than just good news – that’s sound public policy that’s been evident in the Northeast for many years now. Let’s bury for good the false choices the fossil fuel industry has trumpeted regarding the need to choose jobs and the economy over our environment and our future. Clean energy as an economic driver is not just a good idea, it’s happening right now. The clean energy sector is a leading job generator in New England right now, thanks to public policies in most of our states that mark energy efficiency as our first order energy resource. It’s also allowed us to flatten the curve on new load growth, according to ISO-New England, and defer hundreds of millions of dollars of unneeded transmission investments. And it’s putting millions of dollars in people’s pockets to spend on the local economy, rather being shipped out of state or out of the country for oil, coal or natural gas. Importantly, the President pledged support for a “Race to the Top” program for energy efficiency in buildings, noting: “The states with the best ideas to create jobs and lower energy bills by constructing more efficient buildings will receive federal support to help make it happen.” He need look no further than Massachusetts, and Rhode Island, and Connecticut, and Vermont , and New York and Maryland and the District of Columbia to see how the Northeast states are leading the nation in  capturing the power of energy efficiency. Support from the federal government through a well-designed program can only help us to continue that  progress. And, most importantly, we now we have a strong voice – perhaps the strongest voice ever from an American president – helping to lead the way. Finally.
Tags Climate Change Energy Efficiency Energy Policy Obama State of the Union 2013