We’ve been singing it from the rooftops since the release of the 2015 Residential Lighting Strategy back in December: the residential lighting market will undergo a massive transformation as long as programs and supporting standards continue to propel it towards efficiency. Energy efficiency programs are pulling consumers into more efficient purchases, namely CFLs and LEDs, while federal standards, such as the Energy Investment and Security Act (EISA), are pushing inefficient technologies out of the picture.

While this equation for market transformation looks balanced on paper (standards raise minimum levels of efficiency while efficiency programs simultaneously promote the most efficient technologies), countless real-world variables complicate the process. EISA may come across as the residential lighting panacea, but market share percentages suggest that the effects of the standard are lagging.

The result? The door remains open for other inefficient bulbs to gain market traction.

Shipping data from the National Electrical Manufacturers Association (NEMA) shows some curious market share trends over the last three years illustrating EISA’s lag. The first phase of EISA, prohibiting manufacture of 100 Watt incandescents, started back at the onset of 2012 and barely left a dent in incandescent market share by the time the next phase went into effect nearly a year later. The second and third EISA installments showed similar trends, and we could see that incandescents weren’t exiting the marketplace as quickly as expected. 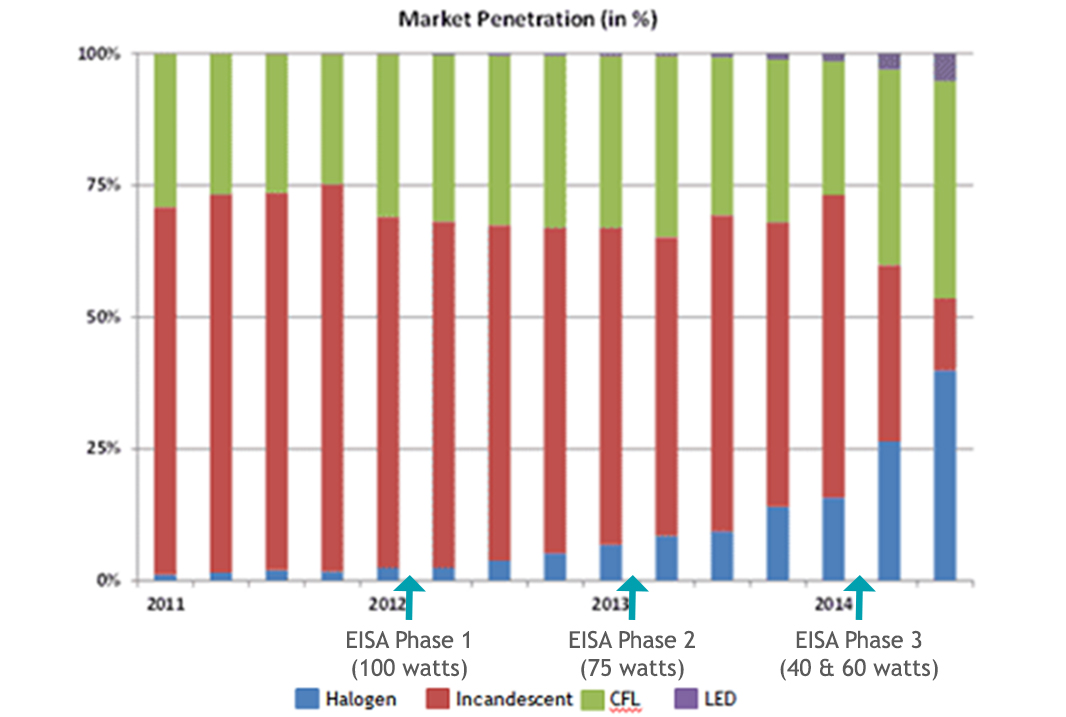 The table above summarizes NEMA shipping data from 2011 up until the third quarter of 2014. Generally, the trend has been incandescents losing shipping market share, halogens gaining, CFLs staying relatively stable at about one-third of the market, and LEDs increasing in shipment tremendously (relatively speaking), though still representing only a small portion of shipments. Note that while this NEMA data set is not complete, as not every lighting manufacturer is a NEMA member and shipping data does not necessarily reflect the sales of the various technologies, it still illustrates valuable market trends.

Of particular interest is that while the final phase of EISA took effect January 1, 2014, incandescent shipments still represented over one-third of lamp shipments in the second quarter of 2014. In fact, significant decreases in incandescents weren’t seen until the third quarter of 2014. Even though CFLs filled in some of the space left by dwindling incandescents, halogens saw the most significant leap, stepping up to fill the role of the least-efficient available bulb. Unfortunately, the big rise in LED share during the third quarter of 2014 was overshadowed by the sheer number of halogens flooding the marketplace along with the uncertainties left behind by the lagging effects of EISA.

What’s clear is that strong standards like EISA need to be matched with strong programs at the other end. Efficiency program promotion of CFLs and LEDs is still critical to their widespread adoption.  Although rising in the ranks of popularity, LEDs are still too expensive without program incentives to compete with halogens for market share. Technological innovations and energy efficiency programs need to be at full force to match the convenience and availability of halogens moving forward. These factors leave a large opportunity for efficiency programs to bring about true market transformation in the coming years.