In this edition, we cover three of the most notable policy developments in the region, including a shakeup at the Maryland Energy Administration, recent news from New York, and signals from Massachusetts that energy efficiency will remain a first order resource. We then close with a brief summary of the EPA’s new air quality rule, and why it matters for energy efficiency.

In our August Policy Tracker, we applauded Maryland’s bold commitments to energy efficiency, enabling new gas programs and prescribing electric savings targets reach 2% of retail sales by 2020. Since then, recent staffing changes at the Maryland Energy Administration (MEA) have some worried about the sustained commitment necessary to achieve these goals, with a MEA filing describing investments in efficiency as an added cost, rather than the least-cost supply resource for Maryland’s ratepayers. For more, visit Maryland Public Service Commission’s Docket 9153.

New York remains a hotbed of energy policy developments. Earlier this month, Governor Andrew Cuomo was joined by Al Gore at Columbia University to announce the Empire State’s commitment to sustained carbon reduction goals and a new proposal to create a North American Carbon Emissions Market, connecting the Regional Greenhouse Gas Initiative (RGGI) to similar markets in California and the Canadian provinces. The Governor’s support for clean energy echoed at the regulatory level by the New York State Department of Public Service, which issued their long-awaited Distributed System Implementation Plan Guidance (DSIPS), providing a more detailed window into what New York regulators see as the utility of the future.

The new nation-leading efficiency plans are only one component of the state’s energy picture. After a downgrade in its safety rating by the Nuclear Regulatory Commission in early September, owners of the 680MW Pilgrim Nuclear Power Station announced it would be shutting down by 2019, throwing fuel on an already heated debate about energy options in the Commonwealth. Key to understanding where energy efficiency and other fuel sources fit within this energy future will be the results a Regional Electric Reliability Options Study being commissioned by the state’s Attorney General, which is expected to be published in mid-November. 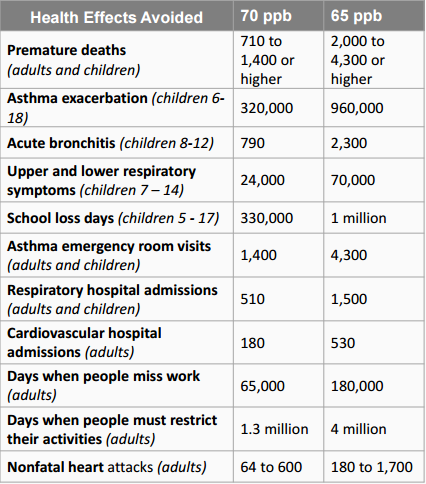 On October 1, the Environmental Protection Agency issued a final rule on new National Ambient Air Quality Standards (NAAQS). These standards are designed to limit pollutants that react with the sun to create ground-level ozone, which has direct adverse effects on human health. This included pollutants from vehicles, power plants, and industrial solvents (et al.)  Below is a chart showing the projected benefits to human health of a standard at 70 parts per billion (ppb) and at 65 ppb.  The final rule settled on 70 ppb.

Most counties are already projected to meet the standard due to requirements of the EPA’s Clean Power Plan and the Tier 3 Vehicle Emission and Fuel Standards Program (et al.). See link for a map of counties whose ambient air quality does not currently meet the standard, contrasted with another of those projected to reach attainment by 2025 (based on 2014-16 data).  NEEP is monitoring this standard because energy efficiency and electrification of the transportation sector are two cost-effective approaches that states might implement to move their counties from non-attainment to attainment.